Unsettling horror movies are about as fun as having a hamburger at Taco Bell.  They can be a nerve-racking chore to sit through, but if they have a big money shot at the end – well then it’s alllllllllll worth it.  Such is the case with the new horror/thriller The Invitation.  It’s the type of movie that gets under your skin, pretty much from the beginning, and doesn’t decide to burrow out until the final 20 minutes.

The story is actually fairly simple:  Will (Logan Marshall-Green) and his new girlfriend Kira (Emayatzy Corinealdi) are off to Will’s ex-wife Eden’s (Tammy Blanchard) dinner party, which will include her new husband David (Michael Huisman) and a host of other friends from Will’s past.  Quick backstory – Will hasn’t seen Eden in over 2 years since their son’s death, as she went away to Mexico, and now she’s back and already remarried.

As Will gets to the party, his nerves are apparent as he enters the house where he and his son used to live.  He seems happy at first to see Eden, and David even welcomes him with open arms.  Possibly a little too open though.  Will seems sketchy of David from the get-go, but takes his mind off it by mingling with other people at the dinner party.  A strange girl named Sadie and a guy named Pruitt (John Carroll Lynch), who is a friend of Eden and David’s from Mexico, are also in attendance. 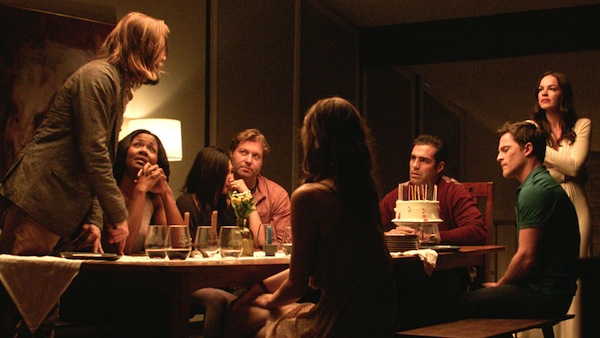 It’s shortly after Pruitt’s arrival that David and Eden gather everyone in the living room to discuss what exactly they had been doing in Mexico for the last 2 years.  Long story short – they joined a cult.  But a happy cult!  Allegedly.  A cult that helps wash away pain in your life by agreeing to kill yourself for the greater good of a cult God or something.  And it’s when David and Eden show an actual assisted suicide on their laptop from their visit that everyone starts looking sideways at one another.  In addition to that, Will becomes more and more skeptical about why the dinner party is actually taking place.  Oh – and why are the doors locked and why are there bars on the windows?  Minor details.

What unfolds after the laptop viewing is a fun party game called ‘I Want…..’, where David and Eden ask their guests to let loose and be honest about what they want.  Kissing and cocaine are involved – oh, and Pruitt basically tells a story about how he killed his wife.  As Will’s paranoia begins to settle in more and more about what the agenda is here, The Invitation becomes a guessing game as to whether or not something bad is really going to happen or if Will’s imagination and deep-rooted pain is what’s really front and center.  My lips are sealed, but it would be best advised to actually steer clear from watching any of the trailers or reading other reviews of the movie to get the best viewing experience. 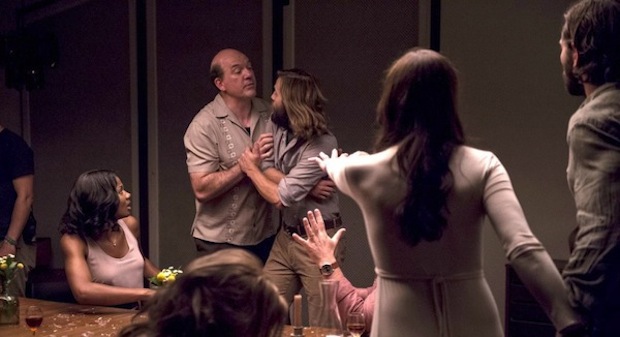 The Invitation is one of those rare movies that lived up to the hype for me.  Unnerving from the start, it kept me interested even though it was a super slow-burn.  Logan Marshall-Green was terrific as Will, the paranoid grieving father who is battling bad things in and out of his head throughout the 100 minute runtime.  Equally great was John Carroll Lynch as the obvious ‘this guy has something up his sleeve’ character, and Lynch always seems to play the creepy guy pretty easily.  Isn’t that right, Twisty The Clown?  All in all, there were no weak links on the acting front – which is a pretty big feat considering all of the guests who attend this party.  Solid directing from Karyn Kusama as well, as she gave the audience some great looking shots and captured the atmosphere beautifully, in a twisted kind of way of course.

Only a few bummers about The Invitation.  There were some times where I rolled my eyes at the decisions of our partygoers.  More than a couple instances where I would have been bolting out the door to go get some fast food and finish the night with some Netflix.  Oh sure, free unlimited alcohol is very tempting – but as soon as the hosts would have showed me a video of someone dying, I think I would have been reaching into my pocket for the car keys.  The movie also could have used about a 10 minute trimming in the runtime department, as it almost built up to the crescendo a little too slowly for my taste.

Shit – I can’t complain though.  The Invitation was a tense little sonofabitch that had one of the better payoffs in recent horror movie history.  Not even sure I would call it a horror movie btw, but it’s more horror than a lot of horror movies that “claim” to be horror.  That was a lot of horrors in that last sentence.  But anyway, even though the year is young – something tells me The Invitation will make it into my Top 5 of 2016.  And I’m sure it’s going to just be tickled pink and thrilled about that!