When I first heard about the movie Bite, I was definitely intrigued and my interest grew steadily.  I dig gross-out horror movies that involve bugs or people turning into bugs.  And when the trailer arrived, my interest grew larger.  And then the early reports of screenings came out where people were passing out and throwing up and my interest kept growing, and growing, and growing..…until it was ready to explode all over the…..

Whew.  Sorry, got caught up in the moment there.  Let me drink some water.  Ok, all good now.  Sadly, even though I seemed to be on the road to a good horror climax with Bite, instead I was left with the dreaded horror blue balls. 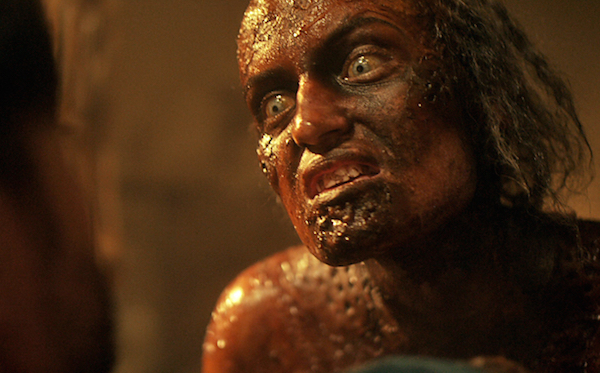 I’m not going to sugar coat things here.  I didn’t really like Bite, but I’ll refrain from using the predictable ‘Bite Bites!‘ tagline.  What I will do is try and sum up the story in a few sentences so I don’t bore you with the details:  Casey (Elma Begovic) goes on a bachelorette retreat party with her girlfriends and in the process gets bitten by a bug and cheats on her soon-to-be hubby (not exactly in that order).  The bug bite gets infected when Casey gets back home, pus ensues, her friends are dipshits, and that soon-to-be hubby is a slimeball with an overbearing annoying mother.  So what happens next?  More pus ensues, people die, and Casey starts to morph into a bug which is a blessing because then she doesn’t really talk as much.

Now let’s get on with 10 things that I learned from watching Bite:

So was Bite all bad?  Not really.  I did get a little more into it when it broke into the second half.  However, it ended up being a pretty big tease because things never got as nasty and gross as I had hoped.  The acting was…….there.  That’s about as nice as I can put it.  The effects actually were good considering the budget, and most were of the practical kind which always gets a thumbs up from me.  In addition to that, Director Chad Archibald did pretty good job visually with everything as well.  I’m really stretching for some positives here.

So here we are Bite.  I really wanted to like you.  Hell, I was even ready to love you.  Perhaps I was expecting too much from our first date.  This movie would have worked much better if it wasn’t played so straight-laced.  There was comedy, but it was unintentional – and I feel like if Bite had been more of an actual comedy/horror hybrid then we could have been in bed together right away.  But alas, it was not meant to be and I’m left with that ‘overhyped horror movie’ taste in my mouth, and because of that I find myself looking for my Blu-ray copy of The Fly.