Pfffft.  Screw that new Ghostbusters movie coming out next week.  Ed and Lorraine Warren are the REAL ghostbusters and they’re all about busting up the fun that several nasty entities are having in the long awaited sequel to James Wans’ 2013’s stellar flick The Conjuring, appropriately titled The Conjuring 2.  The question on everyone’s mind when a horror sequel comes out is always whether or not it’s as good, or maybe even better, than the original.  And I’ve read some reviews calling this new incarnation ‘The best horror sequel ever!‘.  Well, as the great Harvey Keitel once said…..Let’s not go sucking each other’s dicks just yet.

Yes, it’s been 3 years since The Conjuring came out, and more importantly – 3 years since I’ve gone to see Vera Farmiga up on the big screen.  She’s a very attractive lady, so let’s just get that out of the way.  The Conjuring burst onto the scene in 2013 and in my opinion, brought much needed life into the pulse of the horror world AND is one of my top horror movies in the last 15 years.  It even spit out a quick spin-off called Annabelle, which we’re better off forgetting even exists and should never speak of again.  But now the dynamic paranormal husband and wife duo are back!  And oh have they pissed off some spirits……..

Much like it’s predecessor, The Conjuring 2 opens up with a pre-opening credits scene having Ed and Lorraine Warren (Patrick Wilson and Vera Farmiga reprising their roles) show up at the infamous Amityville house in New York in the 70’s.  While they try to figure out if the house is indeed haunted, Lorraine takes an out-of-body trip into the past to follow the murders that happened there when a man killed his entire family with a shotgun.  Was he literally crazy or was there something possessing him to do it?  Lorraine finds out soon enough when we get our first glimpse at the creepy-ass nun, and we also get a possible glimpse into the future with an important character’s death as well. 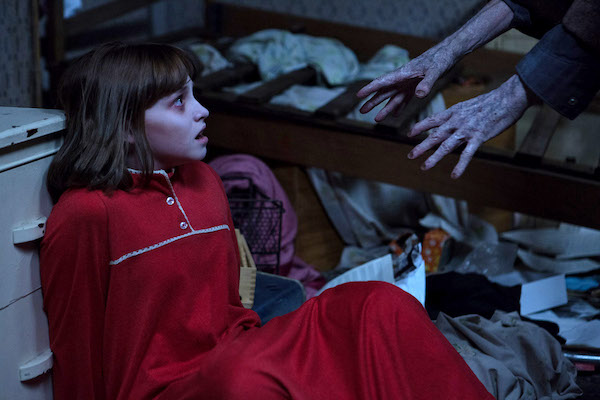 After the opening, the bulk of The Conjuring 2 takes place in London, England (set appropriately to The Clash’s ‘London Calling’ when we get there) and centers around Peggy Hodgson (Frances O’Connor) and her four children – more specifically her daughter Janet (Madison Wolfe).  When Janet’s not getting busted at school for smoking, she’s having weird sleepwalking trips and conversations with a creepy old man ghost that claims their house is HIS house.  Things get weirder when Janet actually seems to become possessed by the ghost, who we eventually find out is named Bill Wilkins – a man who died of a brain hemorrhage in his favorite leather rocking chair.  Janet’s voice changes in and out between hers and Bill’s (no, it’s not puberty) and her Mom and siblings are at their wits end and don’t know what to do about it.  Enter in Ed and Lorraine Warren!

After Lorraine had her premonition of death and super evil experience in Amityville, she wants to get out of the paranormal game.  Ed however feels they have a duty to help people who are struggling with these unknown forces, so he convinces her to take a trip to merry ol’ England and see if the Hodgson family’s case is a hoax or indeed the real deal. They both agree to leave as soon as everything is verified, but we all know that things aren’t going to go according to plan, right?  From here on out, the tension is ratcheted up a notch and The Warrens go into full paranormal ass-kicking mode and that fucking creepy-ass nun keeps popping up too. 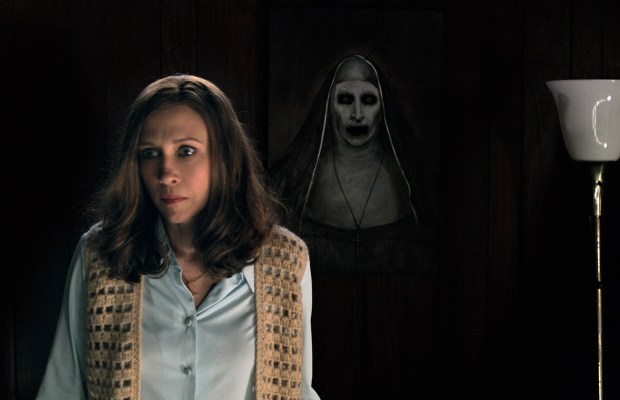 Let’s talk acting for a minute in The Conjuring 2.  Patrick Wilson & Vera Farmiga are once again firing on all cylinders as The Warrens and we actually get a better sense of their relationship in a sweet kind of way, especially with the incorporation of Elvis Presley’s ‘Can’t Help Falling In Love With You’ (which does come out of left field).  The real star here (and a breakout star at that) is Madison Wolfe who pulls off the feat of a child actor taking a possession role and knowing what to do with it.  She is a pretty commanding presence for such a young actress, and she did a good impersonation of Bill Wilkins when she needed to as well (calm down, I know it wasn’t her voice).  Shout out to Simon McBurney’s mustache as well.

James Wan is back in the director’s chair here (as well as helping with the writing process) and I honestly love some of his camera techniques.  The sweeping shots zooming in and out of rooms and just the overall way that Wan knows how to milk a scene through the lens is kind of mesmerizing.  The whole time I was watching The Conjuring 2, I thought about how amazing it would be to have a haunted house made out of it (I’m looking at you Halloween Horror Nights).  Top notch visual shit here.  How’s that for some technical terminology for you?

One of the things that made The Conjuring so memorable for me back in 2013 was the fact that even though there were cheap jump scares, they worked better for me than in most movies.  That happens here in the sequel as well.  Probably three times where I actually jumped, and that’s a lot for me.  On that topic, The Conjuring 2 creeped me out more overall than the original.  I’ve mentioned the creepy-ass nun a few times (although it bears another mention), but don’t even get me started on The Crooked Man.  He needs his own movie ASAP!  My crystal ball tells me that it might happen a la Annabelle…….

Any peeves with the sequel?  Of course.  It definitely could have been trimmed by 15-20 minutes.  The middle dragged a little too much for my taste and there were definitely more eye-rolling moments for me here than in the former movie.  Too many ‘What the fuck are you doing that for?‘ scenes, but I get it – it’s a horror movie and these things happen.  I think someone got out of their bed about 14 times to investigate strange noises though.  The other negative was that even though Madison Wolfe was great as Janet, the whole family dynamic paled in comparison to The Perron Family in the original.  I just wasn’t as invested.  The Conjuring was smart horror.  The Conjuring 2 is a little too paint-by-numbers and ‘not so smart horror’ for a good majority of it’s lengthy duration.

I don’t want to compare too much though because the bottom line is that The Conjuring 2 is a pretty good (not great) sequel and a pretty good standalone horror movie as well.  Mission accomplished if you can creep me out and make me jump a few times in the process.  Now whether or not you believe any of this stuff actually happened could also dampen your viewing experience.  It’s always risky when things are ‘Based On A True Story’.

A few elements could have been tweaked, along with the runtime, but in the end I got to see my crush Vera Farmiga AND have two new characters (the creepy ass nun who does have a name and The Crooked Man) to haunt my dreams for nights to come.  I do feel like this franchise needs to end now, but considering it will make money and considering that Insidious is going on it’s fourth installment – I have a feeling that The Conjuring train is just getting ready to roll.  Choooo Choooo!!