There’s a debate raging in the world of horror right now!  And that debate is whether or not the new horror film It Comes At Night was marketed in a deceivingly unfair way.  I did a post about the original trailer a few months back and noted how creepy it looked (with accompanying creepy music as well).  Now granted, the trailer did make it look like a lot more would be happening in the movie from an action standpoint…….but after watching the movie, you know what?  I didn’t care about what the trailer may or may not have promised because I loved the movie anyway.

Written and directed by Trey Edward Shults, It Comes At Night takes the ‘Who can you trust?‘ formula that has been done many times before – and manages to put it’s own gorgeously shot spin onto it.  At the forefront of the movie is actor Joel Edgerton who plays Paul – a father and husband who is trying to survive alongside his wife Sarah (Carmen Ejogo) and son Travis (Kevin Harrison Jr.) in a remote house in the woods. Surviving against what exactly?  That remains to be seen (literally), but there is some kind of sickness that’s spreading that also has taken the life of Sarah’s father – shown at the beginning of the movie. 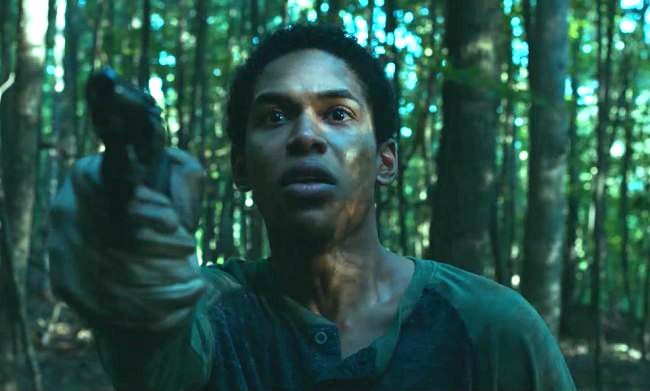 After a man named Will (Christopher Abbott) is caught breaking into their house at night, Paul begins interrogating him and thus the trust game begins.  Will explains he was just trying to survive with his wife and child, and needed some water.  It’s at this point that Paul makes an important decision of believing Will, and allows him and his family to come stay at their house in exchange for some food.  Paul lays down the rules of the house, most importantly that they don’t go out at night unless they have to – and also that a certain red door downstairs needs to be closed at all times.  After that, everybody is one big happy family living under one roof…….until that dreaded trust game begins again.

It Comes At Night is a tricky movie to review.  As I alluded to earlier, I honestly loved it – but I can honestly see how some people won’t.  Not just because it doesn’t live up to what the trailer and marketing promised – but because nothing is really answered.  There isn’t a neatly tied bow put on top of the ending.  And it may be too slow and boring for some.  I liken it to when The Witch came out (also put out by A24 Films).  The hype was loud and strong for that one – and when people saw it, it was either loved or loathed.  I remember coming out of the theater (personally I liked it) and a large group of people behind me were ranting and raving about what an overrated piece of shit it was.  Fast forward to It Comes At Night, and if you read the user reviews on IMDB and Rotten Tomatoes – you may see the same type of remarks. 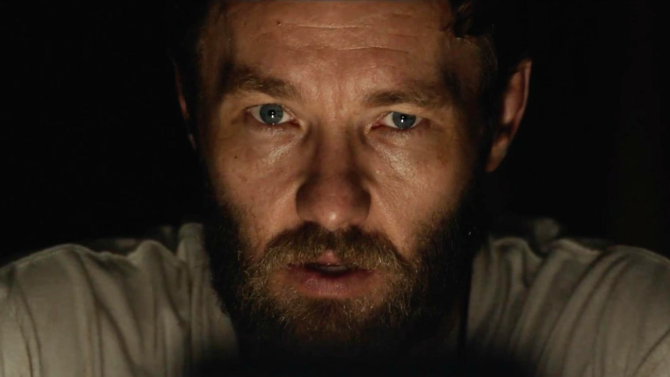 Acting wise, no one should be complaining about that when it comes to this movie.  Joel Edgerton is top notch as always (I love everything this guy is in), as is Christopher Abbott who plays ‘the guy you don’t know if you should trust’.  But honestly, the breakout star here is Kevin Harrison Jr., with his sweet and almost too trusting performance as Travis. His character has the most depth, specifically when his nightmares are put front and center.  You feel his pain, sorrow, and naivety.

My qualms with this movie do stem from what some people are complaining about.  I’m all for ambiguity, and I don’t mind trying to figure things out on my own after I watch something.  Part of the fun sometime is leaving a theater, and either contemplating things on your own – or sharing a conversation with someone else to come to some conclusions. But I did feel that It Comes At Night left a little too much to the imagination.  Literally nothing is explained and there are moments in the movie (you’ll know which ones if you see it) that have no follow-through.  It can be frustrating, but it didn’t deter me from enjoying most of what I was watching onscreen.

It Comes At Night is a gorgeously shot horror movie (yes, I’m calling it a horror movie), that puts you at the forefront of paranoia and trust.  Is it a necessarily original idea?  No. But it’s a well executed one and I appreciate what Trey Edward Shults did here.  Don’t become too invested in the back and forth banter on the internet about this movie and whether or not it’s true to the trailer or not.  Instead, go out and support it (and horror in general) and decide for yourself.  If you hate it, then you can come back here and throw internet tomatoes at me.