It’s hard to believe that The Conjuring spinoff flick called Annabelle came out almost 3 years ago.  It seems like just yesterday that I was throwing tomatoes at the screen and yelling obscenities after watching that atrocity.  But, I have good news!  A prequel to that very movie called Annabelle: Creation has arrived and……….wait for it…………..it’s good!!!  Oh – and pretty fucking scary too.

Long prequel short, this new addition to The Conjuring universe revolves around a dollmaker named Samuel Mullins (Anthony LaPaglia) and his bedridden wife Esther (Miranda Otto) who are still mourning the death of their daughter ‘Bee’ that happened 12 years ago.  To help cope, they decide to open their home up as a new shelter for some orphaned girls.  Among them are Janice (Talitha Bateman), a young girl stricken with polio and her best friend Linda (Lulu Wilson) – with both girls making a pact to stick together, no matter what.  There are of course rules laid down by Samuel, with one of them being that no one is to go into their dead daughter’s room.  Well of course Janice snoops around and ends up breaking that rule – giving us our first good taste of Annabelle the doll.  And what a taste it is!

I could go on more about the plot – but for one, I don’t want to spoil things.  And two, does it really matter?  The plot isn’t the strong point here.  It’s the mood, tension, and creepy atmosphere that director David F. Sandberg and his crew have created for us.  They are doing their best to right the wrong that was the first ‘prequel’.  It’s your standard horror fare here (jump scares, music stings at the right moment, dumb choices by characters), but Sandberg knows how to milk it.  Lights Out, his previous film, was a great example of that as well.  In addition to the perfect tone, we also get some great nods to The Conjuring and some of it’s soon-to-be spinoffs.  And I will say, there is ‘something’ in this movie that could deserve it’s own spinoff too – and I was grinning ear to ear when it’s presence was paid off in this film.

The usual stuff doesn’t work in Annabelle: Creation.  Way too many “What the hell are they doing that for??” moments.  Some wooden, generic acting (sorry, I wasn’t feeling Sister Charlotte – especially towards the end).  But to be honest, it was all forgiven because the creepy definitely outweighed the crappy.  When I almost throw my drink in the air from a well-executed jump scare, then we’re on the right track. 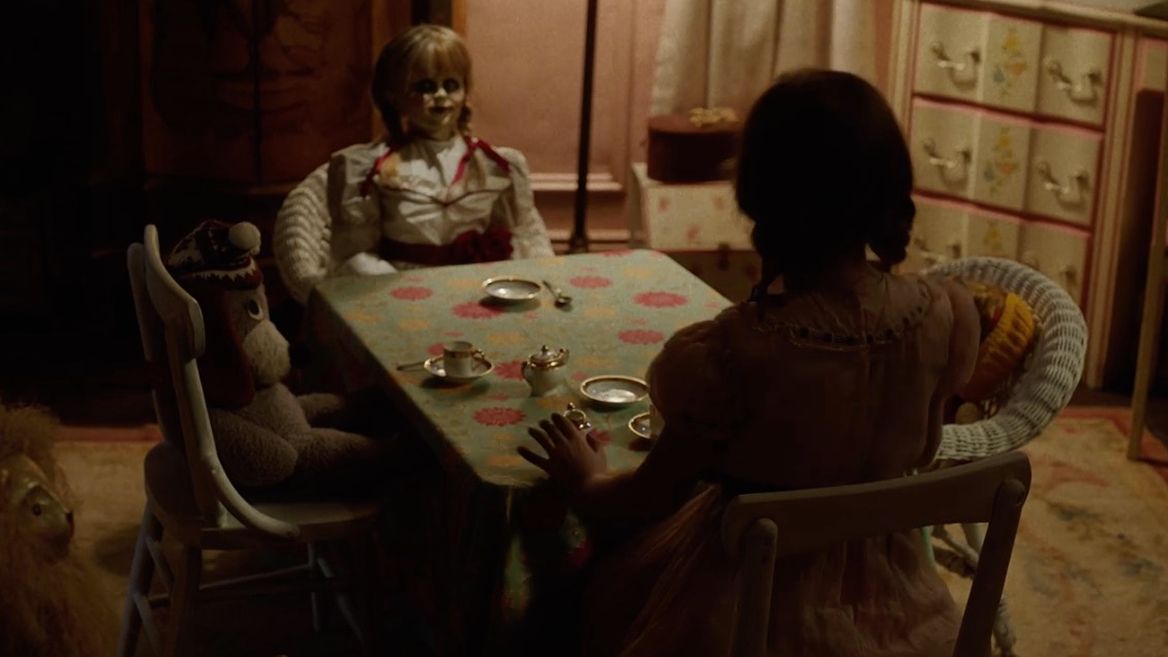 I know the naysayers will be out in full force against this movie.  And I honestly get it.  I borderline hated Annabelle because it took something great like The Conjuring and it’s sequel, and reduced to a paint-by-numbers snoozefest.  But much like the recent Ouija sequel, Annabelle: Creation redeems any credibility that may have been lost because of it’s predecessor.  Dare I say I liked this even better than The Conjuring 2?  I also got good vibes due to the fact that it brought back memories of other good past ‘creepy doll’ horror movies like Dolls and Child’s Play 2.  See this one with a full theater if you can on opening weekend.  It’s made for that kind of experience, and it reminded me how much fun it can be to watch a truly well done and scary movie in that environment.