Have you heard the one about the evil clown named Pennywise that eats children and feeds off of their fears?  I guess the punchline isn’t going to really be funny.  Regardless, the wait is over and the revamped version of Stephen King’s IT movie has finally arrived in theaters!  Part remake.  Part redo.  And all business.  Literally, because it’s going to make a shit-ton of money on opening weekend (latest projection is around $130 million).  But does this new incarnation of IT live up to the hype, and how does it compare to the original 1990 mini-series of the same name?  The latter I won’t focus on too much, but the former I definitely will.

Now as I just said, I don’t want to dwell on whether or not this 2017 version of IT is better or worse than it’s predecessor.  The original will always have a special place in my horror heart, even if it was a bit uneven and sloppy at times.  Tim Curry is and forever will be Pennywise The Dancing Clown to me.  That movie had some creeeeeepy scenes that still hold up today, and people need to get over the whole ‘spider incident’.  It was in the book, not once…..but twice!  Ugh.  Don’t get me started on a tangent about that……But I’m really here to talk about the new IT and the fact that this particular movie stands on it’s own with a share of cheers and jeers from me.  So let’s float on down to the next paragraph and get started!

Derry, Maine……a little town where strange things seem to happen every 27 years.  Not your ordinary strange things though.  I’m talking ‘kids disappearing and being found murdered’ types of things.  One of those murders opens the movie (quite brutally I might add), with the death of a little boy named Georgie at the hands and teeth of Pennywise.  Menacing and snarling, Pennywise tempts Georgie with balloons and the ‘smell of the circus’ in a sewer drain after Georgie’s paper boat that his brother Bill made him floats away and ends up in the hands of the clown.  This sets up the movie, as Georgie’s brother Bill and his band of loser friends (relax, there’s a reason I’m saying that) come together and try to not only figure out what happened to Georgie – but figure out what exactly is going on in the entire town of Derry as well. 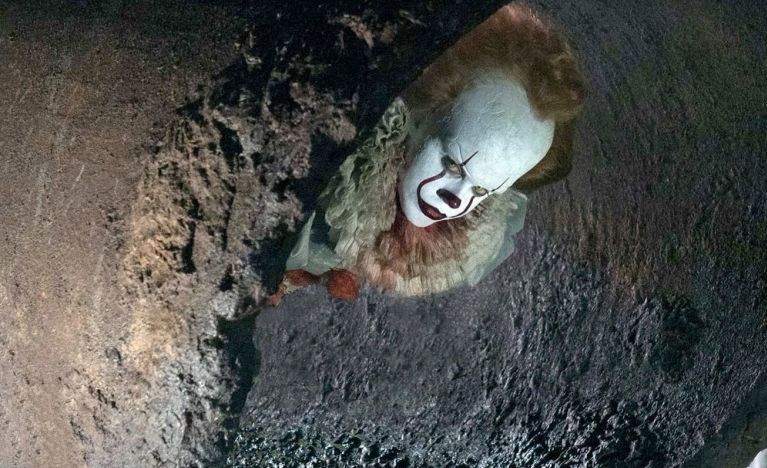 The strength of IT lies in the performances of the seven kids in The Losers’ Club, a name the group has given themselves after continuously being bullied both at and away from home.  In no particular order we have: Bill (brother of Georgie and constant stutterer), Bev (the only female member of the club), Ben (the chubby kid who has a crush on Bev), Richie (the vulgar comedian of the bunch), Stan (the Jewish germaphobe), Eddie (the mama’s boy who might or might not be a hypochondriac), and last but not least we have Mike (the black kid who lives on a farm).

Everybody has fears, and these kids are no exception.  Pennywise (played here by Bill Skarsgård) feeds off of those fears (sometimes literally), and every chance he can get he exploits said fears to the maximum.  So not only are these kids seeing Pennywise himself throughout the movie, they’re also seeing the very things that make them afraid.  So naturally, just when our fearless losers start to make headway in figuring anything out regarding what’s happening in Derry – Pennywise has other ideas and unleashes constant horrifying mindfucks their way.  I won’t spoil anything more as far as the plot – it’s best to see and experience it for yourself.

So let’s get down to what everybody is probably wondering.  How does Bill Skarsgård’s Pennywise performance compare to Tim Curry’s original?  Having read the book, I will say that they definitely got the overall look down.  Almost looking Victiorian-like, the ruffled clown suit combined with the frantic orange hair is honestly beautiful to look at.  As far as the actual performance, I had a few issues with it.  Skarsgård is clearly chilling and puts Pennywise on display in true evil form, but I missed the charm from what I read in the book and saw in the 1990 movie.  Even when he’s trying to be charming or witty, it still sounds menacing.  Overall though, I dug this version of Pennywise – minus the CGI elements which I’ll get more into in a little bit. 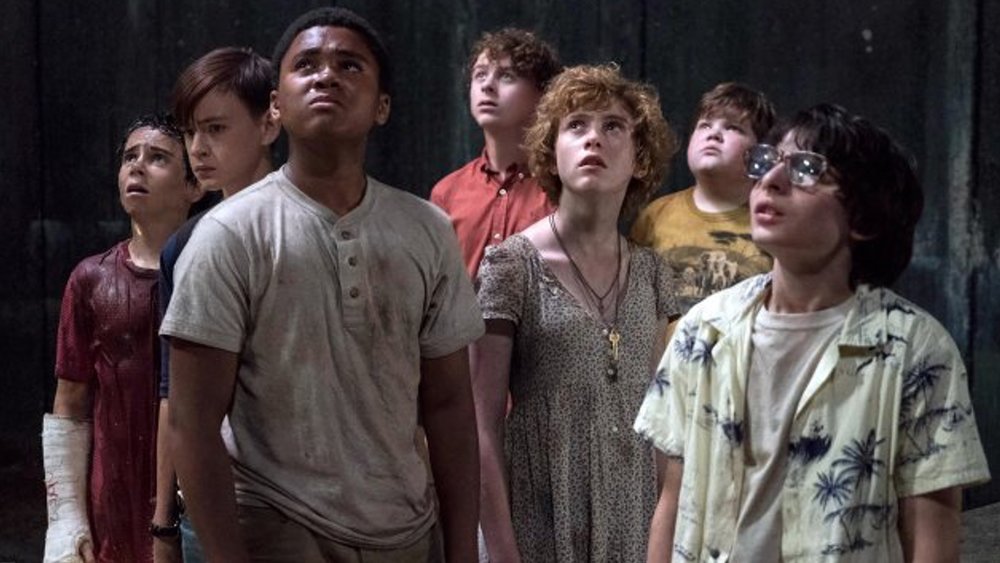 As mentioned earlier, without a solid group of kids – this movie wouldn’t succeed.  And luckily we actually feel like the kids in The Losers’ Club are friends and have each other’s back no matter what.  The first standout for me was Bev (played by Sophia Lillis).  She is the one, besides Bill, that keeps the group grounded and she’s quite the badass to boot.  Having to deal with an asshole for a father at home, Bev uses that inner torment to take on Pennywise.  Sophia Lillis, who I had no knowledge of before this movie, plays Bev with just the right balance of coolness and vulnerability.  Next up as far as a standout was Richie (played by Finn Wolfhard of Stranger Things fame).  Without comedy, this story would fall flat and be just another ‘by the numbers’ horror movie.  Richie is the most consistent comedy relief, usually in a vulgar way, and Finn Wolfhard shows us that his role on Stranger Things is no fluke.  All of the kids did a great job, so I hate singling out any of them – but those are my Top 2.

Now comes the part of the review that some might disagree with me about.  I’m sorry, but I can’t say that IT has been my favorite horror movie of the year so far.  And I’m not sure if I can even say that I liked it better than the 1990 original.  Blasphemy, some may say.  But when I saw the original, it was an experience.  Yes, it was a TV movie – but it stuck with me.  I purposely read the original Stephen King novel before seeing this new version.  I wanted to see how director Andy Muschietti and his writers would improve on the story for the move to the big screen.  And I have to say I was kind of disappointed.  I didn’t understand why some of the roles of the kids were switched around, and the narrative especially towards the end of the film kind of lost me and was sloppy.

And the CGI.  My god don’t get me started on the CGI.  I understand that in today’s day and age, CGI is the norm in action and horror movies.  But here it felt forced.  There was no need to have Pennywise frantically running at the camera like a video game numerous times.  It took me out of the movie, and I honestly didn’t want it to.  But it did. 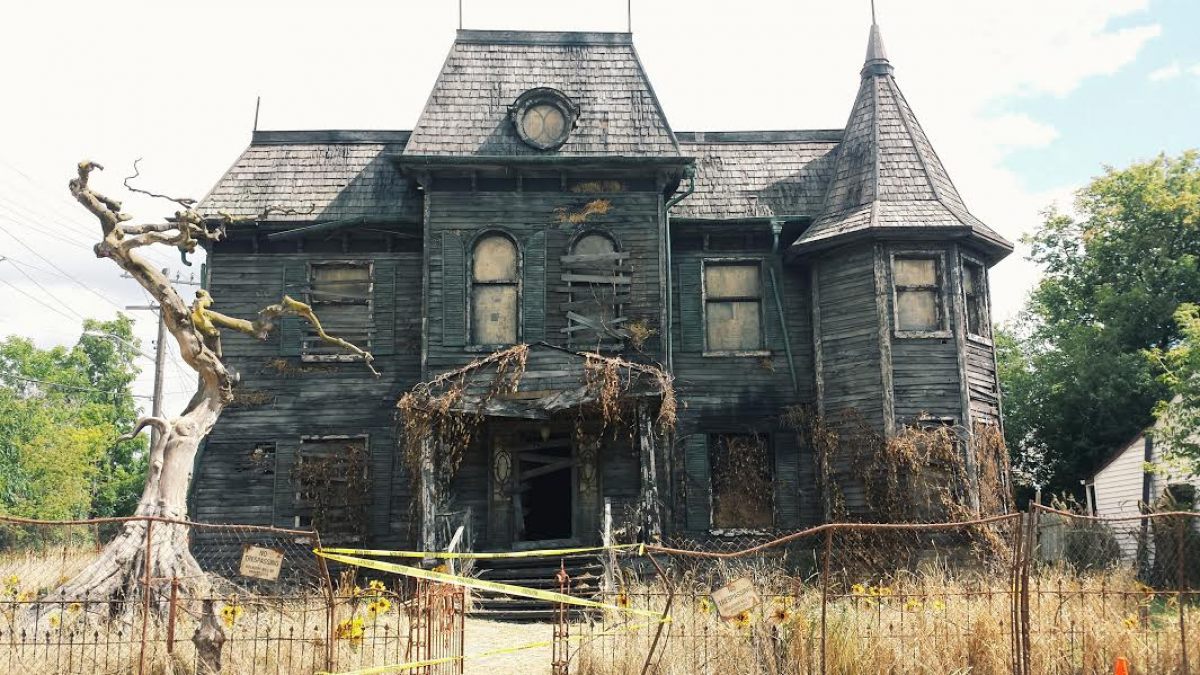 On a positive note, other than the already mentioned acting, was that IT in general looked great.  I can forgive the CGI in spots, because the visuals were on point in a lot of scenes.  The Leper at the Neibolt House?  The clown room at the Neibolt House?  The headless easter egg creature at the library?  All very well executed and scary.  Muschietti did a great job behind the camera.  Overall I dug the tone throughout and am anticipating Chapter 2 coming in 2019.  Oh yeah – spoiler alert for those who never read the book or saw the original TV movie……there’s a part 2 with the kids as adults!

All in all, I honestly really liked IT.  I know it seems that I’m being a bit harsh with some of the parts of my review, but I think that’s because I went in with such high expectations.  Not that some of those expectations weren’t met, but parts of the movie just fell flat for me (especially the CGI-laden parts).  Reading the novel beforehand didn’t help either I’m sure.  In my head, I had planned out what I wanted to see on the big screen with certain characters and elements of the story.  And I was just let down in spots.  No biggie – I still loved the performances and commend the new Pennywise on bringing something new to the table with that character.  I will more than likely float back down to my local theater and see IT again, thus my review may be edited in the near future for the better.  “Beep Beep“.