Back in the late 80’s, I was in full horror movie swing.  Two-fisting rentals from my local video store, I would have marathons with everything I was renting, and take the occasional break to masturbate.  Too much info?  I was coming of age, so deal with it.  Already at that moment in my life where I scoffed at PG and PG-13 horror movies, I would usually go straight for the ‘Rated R’ flicks and steer clear of those made for the “kiddies”.  However, there were actually quite a few PG and PG-13 rated horror movies back then that were worthy of my eyes (Critters comes to mind), but only one really creeped me out and still does to this day.  And that would be……….The Gate!

The Gate is one of those horror movies that feels like it’s Rated R, but it’s not.  There’s goop, slime, blood, zombies, little demons, bigger demons, and satanic rock albums – but on a level that was able to grant the movie a PG-13 rating in 1987.  The old man zombie always creeped me out when he busts through the wall, and then through a mirror before falling to the ground and bursting into a bunch of the little demons.  But the other scene that gets under my skin is when the kids discover the dead dog (with tongue hanging out to boot) and Glen (Stephen Dorff) goes to the front door of the house to see his parents greeting him outside.

That scene made me never want to be bad as a kid anymore, for fear that my Dad would grab me by the neck if I did and say “You’ve been bad!!!“.  I’d feel bad if I had to gouge his demon head out with my hands though, and have his slimy insides get all over me while my Mom laughed in the background.  But yeah, that scene still creeps me out and the movie as a whole (even though some of it hasn’t aged well) still is as enjoyable as it was for me back in 1987.  Could this possibly be ready for a remake or reboot?  I’m looking at you Stephen Dorff.  You don’t really have anything going on.

Move over Hacksaw Jim Duggan – you’re not the only one that knows how to swing a big piece of wood.  That didn’t quite sound right, but whatever.  Henry Morrison a.k.a. Jerry Blake a.k.a. The Stepfather sure loves swinging the ol’ 2 X 4, especially over a guy’s head!

On this week’s Sunday Bloody Sunday, I’m going back to 1987 where actor Terry O’Quinn played in my opinion, one of the best horror movie psychopaths ever.  And in this particular scene, his character of Jerry Blake doesn’t take too kindly to people snooping around in his business.  He has a very strict ‘No Snooping’ policy, and in this instance it involves slapping some lumber repeatedly over a nosy doctor’s head.  Enjoy the pummeling below, and if you haven’t seen this underrated gem, do yourself a favor and seek it out.

Sometimes I think about what the worst, but entertaining, way to die would be.  Choking on a delicious taco from Taco Bell?  Being impaled by an umbrella while rain falls on top of my dead body in an ironic manner?  Yeah, that last one would probably be it.

Welcome to this week’s Sunday Bloody Sunday and a Happy Holiday to you all!  Let’s all get into the Christmas spirit with a scene from a terrible 1987 Christmas-themed horror movie called Silent Night, Deadly Night Part 2.  Yes, this movie is infamous just for it’s ‘Garbage Day’ scene alone – but let’s not forget about the scene where Ricky (Billy’s brother from the original 1984 movie) decides to get creative with an umbrella to dispose of someone who’s been “naughty”.  Bonus points for Ricky’s crazy eyes and for the ironic rain falling at the end of the death, which miraculously only seems to really be falling on the murder spot.  That’s some Hollywood magic right there. 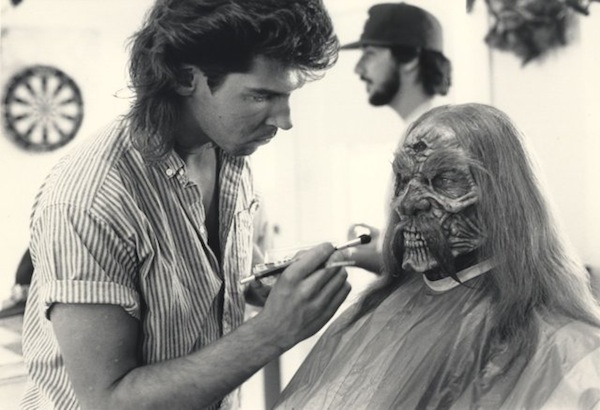 Slim Razor getting his make-up applied for House II: The Second Story (1987)

If you’ve ever had a fear of being killed by a bunch of little toy soldiers, I would leave the post now.  Ok – you’ve been warned.  And the reason I’m warning you is because on this week’s Sunday Bloody Sunday, I’m highlighting a death scene that involves psychotic little toy soldiers from Stuart Gordon’s 1987 amazing little horror film, Dolls.

Not much needs to be set up for this clip, other than knowing that a punk rock girl goes snooping around where she shouldn’t, and finds her eyeless friend (an iconic image that was incorporated on the original VHS cover) and a bunch of creepy-ass dolls.  After she destroys a good majority of them, revealing their little skull faces under the porcelain – she encounters the toy soldiers.  Don’t let their drum taps and harmless bugle fool you…..they’re pissed off. 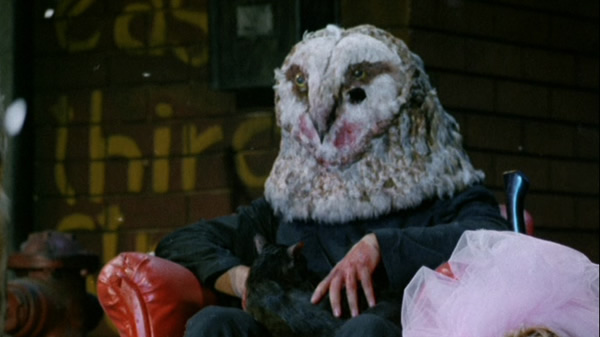 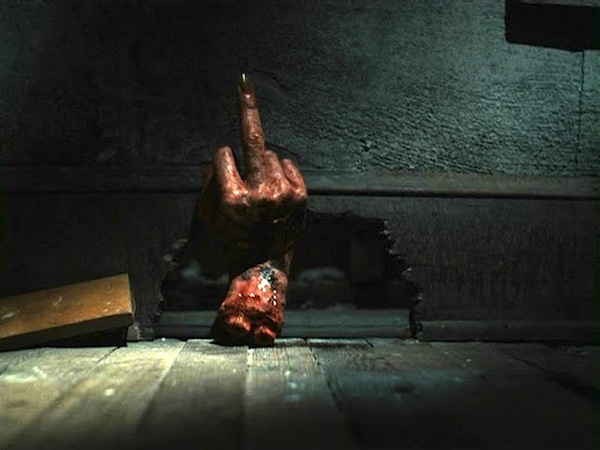 But on Sunday Bloody Sunday, I showcase some of my favorite death scenes from past and present horror movies, so don’t expect to feel entirely toasty and fuzzy after watching the clips.  As I mentioned, this week I’m diving into what I consider the best of the three stories from Creepshow 2.  I’m talking about ‘The Raft‘ and I must have been chewing some Doublemint gum because I’m going to double your pleasure with TWO clips this week!  Don’t say I never give you anything.