Sound the trumpets! Sunday Bloody Sunday is back! Ok, I see that the fanfare should be more like a small party popper that shoots out confetti with a whimper. Nonetheless, it’s been a minute – so let’s get right into it with one of my favorite death scenes from one of my favorite underrated movies, 1990’s Hardware:

As the title of my post and the title of the Youtube clip states, that was in fact a robot killing a perv. I honestly adore Hardware and still remember being a 14-year-old horror loving whippersnapper the first time I saw it. I dig the style, the story, and the robot. And Iggy Pop is in it! The other thing besides the perv getting his just desserts for being so pervy that I loved about this clip (and the movie in general) is the score by Simon Boswell. Not your typical sci-fi/horror score, which is why I dig it so much. Now go back and watch the clip again and rejoice in the return of Sunday Bloody Sunday and of the perv’s demise!

Summer is in full swing, and you know what that means……..sharks are in the water eating people! And also a lot of people are enjoying ice cream. Why, just before I started typing this – I myself had a delicious mint chocolate chip ice cream cone. You know who else is all about making ice cream cones? Clint Howard! And he made the perfect cone in the cult classic 1995 horror/comedy Ice Cream Man. But instead of those gumballs you would see used for eyes on those ‘frog ice cream’ treats, he uses real eyeballs!

Every time I watch that scene I always think the same thing: How the hell does that cop not see the eyeball poking out of the top of the ice cream?!!?! I mean, I don’t just go licking something without looking at it first – and I think I would have noticed an eyeball poking out of my Rocky Road (Rocky…….Road?). But this is a move about a killer ice cream man after all, so I’ll let that tiny detail slide. The moral of this post – go watch Ice Cream Man! Because it’s Clint Howard’s best movie and summertime is the best time to enjoy his zany antics. Now how many of you did your inner Sloth voice when you read the Rocky Road part?

If you’re a vampire, you need to either have rugged good looks or extremely long gangly creepy fingers to get the ladies.  If you’re ever seen the straight-to-video 1991 movie Subspecies, then you know where Radu (the head vampire) falls between the two.  Not saying that Radu is ugly or anything (he’s an acquired taste), but it’s all about those fingers! Ladies, try to contain yourself while you watch the original trailer for Subspecies below:

Other than Puppet Master, the Subspecies franchise is easily my favorite in the Full Moon catalog.  And I honestly always thought that Radu (played brilliantly by Anders Hove) was an underappreciated vampire.  If only today’s generation could appreciate Radu.  If only there were another Subspecies movie coming out soon to help with that appreciation.  If only Anders Hove was reprising the role of Radu.  Do you see a pattern of my thought process here?  Well, it just so happens that Bloodrise: Subspecies 5 is coming later this year!  Get ready to drool over those vampire fingers again, everyone…..and stay tuned for more info!

I always love entertaining horror movie titles.  So you can imagine my excitement with a title like Hauntedween.  Yes, Hauntedween……a lovely little independent slasher from 1991 that reminds me so much of my old video store that I used to frequent as a teen.  Why you ask?  Because I can still remember seeing the VHS cover for the movie.

You have to admit, it’s a pretty sweet cover.  And the mask is actually pretty fucking creepy.  Now granted, this movie falls into the ‘so bad it’s good’ category – but in a very unapologetic way.  And I can respect that when it comes to 80’s/90’s horror slashers.  Considering I remember Hauntedween specifically in VHS form, it should be noted that if you have an original VHS copy then it is definitely worth some cash.  In a season where everyone is watching Michael Myers and little Sam and his lollipop, seek out Hauntedween even if it’s just on Youtube.  To wet your appetite for Hauntedween (can you tell that I really love to say Hauntedween), here’s a clip below of the killer who is clearly distraught over his mother dying.  Or maybe he’s just bummed he dropped his wood. 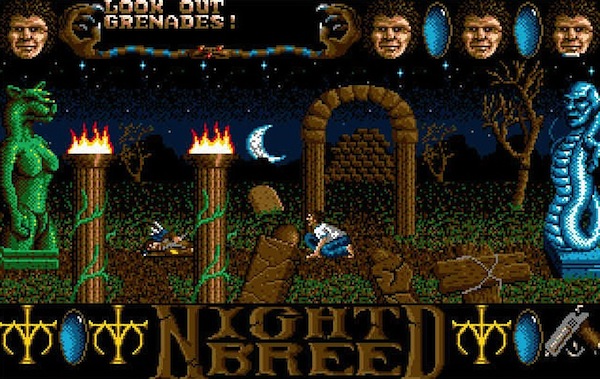 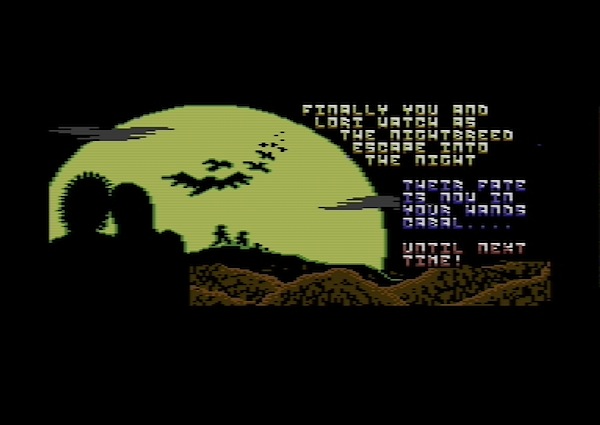 Are you scared of creepy old guys who ride by on bicycles that have playing cards in the spokes?  Ok, good.  I thought it was just me.  And I have John Carpenter’s nonsensical, but somewhat enjoyable, 1994 movie In The Mouth Of Madness to thank for that fear.

Sure, this movie has it’s problems.  But dammit if John Carpenter doesn’t always know how to send those chills up and down your spine even when a bad Halloween mask effect is the focal point.  In The Mouth Of Madness has a lot of creepy ass moments, but the one that takes the delicious heavily frosted cake is easily the scene where Linda (Julie Carmen) and John (Sam Neil) are driving down the road and encounter our bike-pedaling friend.  Watch the clip below and if you haven’t seen it, I apologize for making you sleep with a nightlight on tonight:

“I can’t get out….it won’t let me out.”  Shudder.  I want a duplicate of that mask by the way just so I can scare the shit out of my wife.  Yes, I can be cruel at times.  This is classic John Carpenter by the way and I would have actually loved to see a spin-off movie with this character just popping up in background shots a la Michael Myers.  Personally, it’s moments like these in horror that really tend to stick with me.  The scene is fairly simple, but that’s what makes it brilliant as far as going for that creep-out effect.  Bravo, Mr. Carpenter.  Ok, I’ll leave you now with a pic to make you grab an extra nightlight.