Well here’s a little pic to give you nightmares tonight or make you go sharpen your limbo skills – whichever you prefer.  After it was announced that there would be a sequel to the somewhat surprise 2010 hit The Last Exorcism, a pic has finally surfaced courtesy of Bloody-Disgusting showing our possessed gal Nell (Ashley Bell) bending over backwards for everyone while walking among some common non-possessed folks. 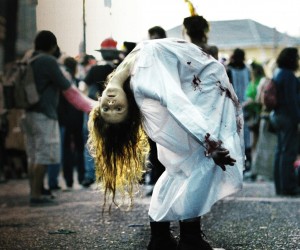 *i can refer you to a solid chiropractor if you want*

The Last Exorcism 2:  The Beginning Of The End is currently in post-production and will be freaking us out sometime in 2013.