It can’t be argued too much that Madman Marz is the red-headed stepchild horror villain from 80’s slasher movies.  Some of you may be reading this and not even know who Madman Marz is.  For shame!  Because in my opinion, the 1982 extra cheesy slasher film Madman defined what 80’s horror movies were all about back then, and deserves more recognition.

So, on this week’s Sunday Bloody Sunday I’m giving it some of that recognition!  Oh, I could go on and on about the amazingly bad hot tub scene that’s in the movie (of which you can see HERE), but I would much rather focus on the death scenes.  Did I also mention that Madman has some of the BEST sound effects and music ever?  Gaze upon the carnage below to hear for yourself, and look out for my favorite at #9 in the clip.  How the Academy overlooked her performance at the Oscars that year is a travesty.

Tasty skeleton bones were my best friend when I was a kid.  I should probably explain what I just said so you don’t think that my parents were irresponsible. In the late 70’s and 80’s, Fleer had a line of children’s candy called Mr. Bones and boy oh boy was it delicious!  Just kidding – it tasted like soap.  But boy oh boy was it fun! 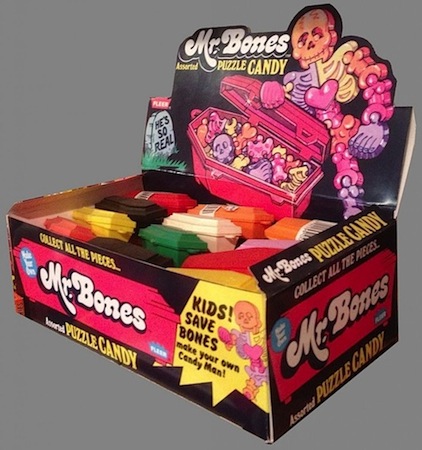 You see, the fun began with the colorful coffins that the candy came in.  And inside those colorful coffins was where the non-delicious candy lived.  Then when you took that candy out, if you weren’t shoving it in your mouth, you could sort all of the parts in order to build your own Mr. Bones candy character!  He even had a heart according to the box, which is puzzling considering that skeletons don’t have hearts.  They also don’t have orange heads either, so suspension of disbelief is a must.  The only catch was that you had to probably snatch up a few of the coffins to construct your personal Mr. Bones skeleton and get all of the pieces.  And if you had success, it would look like this: 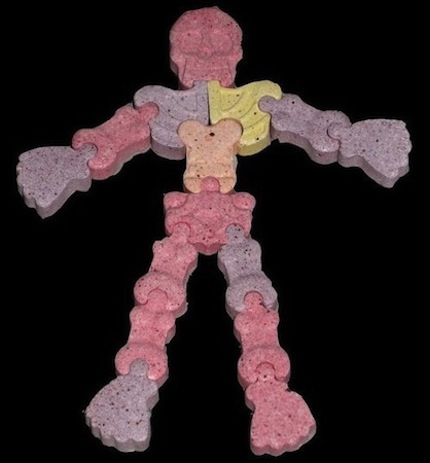 A bit anti-climactic, but if you were 7-years-old it would impress you more than you think.  I remember feeling quite accomplished after I had my very own Mr. Bones in front of me.  And then I would eat him.  He’s was lower on the food chain than me, therefore it felt justified.  So thank you Mr. Bones for creating great childhood memories for me and for leaving a candy soap taste in my mouth after I ate you.  It was all worth it.