I’m sucker for fangs.  Ahhhhhh – see what I did there?  Unintentional puns are the best!  So it’s really no surprise that one of my favorite horror movie posters of all time is for the 1986 horror/comedy hybrid Vamp.

Quite honestly, it’s a gorgeous poster.  Now just a quick sidebar:  If you haven’t seen Vamp, then you might not get the subtle awesomeness of the poster.  This post is strictly about just that, so I won’t disclose my feelings on the actual movie (but with Grace Jones, vampires, boobs, and pure cheesiness – how can you go wrong?).

The poster is simple, but it works.  The red from the lips pops right off, with the ‘V’ and the ‘M’ in the title forming a pair of fangs of course.  This movie is about vampires, so fangs are a must somewhere on the poster.  The only thing I’m not jazzed about is the Vamp tagline “A Frightening Comedy“.  Meh.  Pretty boring and could have used something more fun and clever to coincide with the tone of the movie.  But overall, I honestly love this poster and would display it proudly on a wall next to my Grace Jones shrine.  Fangs for reading this post and look out for the next installment of ‘Horror Movie Posters I Love‘!

It’s rare that I see a horror movie poster and get a boner.  What’s even more rare is when that poster doesn’t have a scantily clad woman on it, but instead has a guy with a wicked guitar and lots of blood.  Ok – this isn’t helping my cause.  Just take a look at the new poster for The Devil’s Candy and let the horror boners commence! 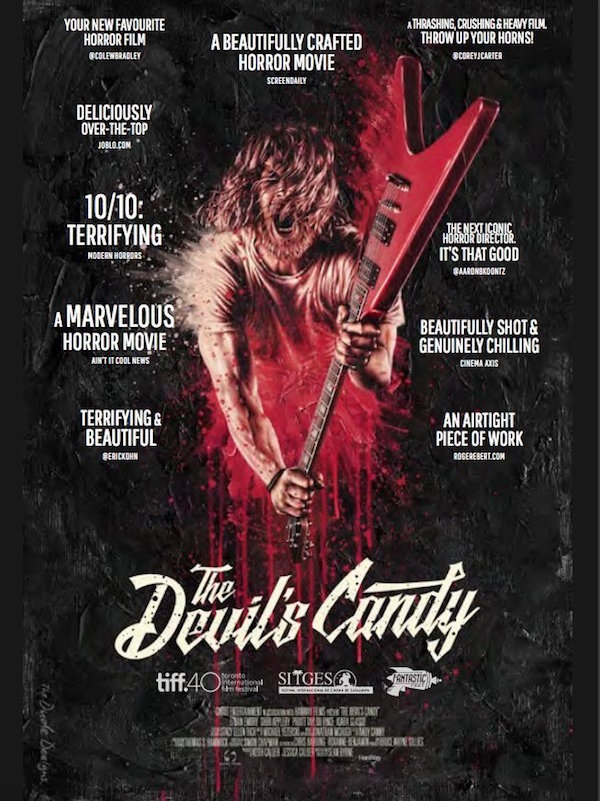 BOING!!!  Ok, now I’m just hearing about The Devil’s Candy, but much like the poster – the movie itself sounds awesome too.  Check the brief synopsis below:

“In this creepily haunted-house tale a struggling painter is possessed by satanic forces after he and his young family move into their dream home in rural Texas.“

The Devil’s Candy premiered last year at the Toronto International Film Festival and the response seemed to be overwhelmingly positive.  No said date for a release here in the US and no trailer yet (which mildly kills my horror boner), but fear not – because the poster is a good sign of good things to come!  Satanic happenings?  Metal music?  Lots of blood?  Yes, yes, and yes please.  Stay tuned for more info on The Devil’s Candy! 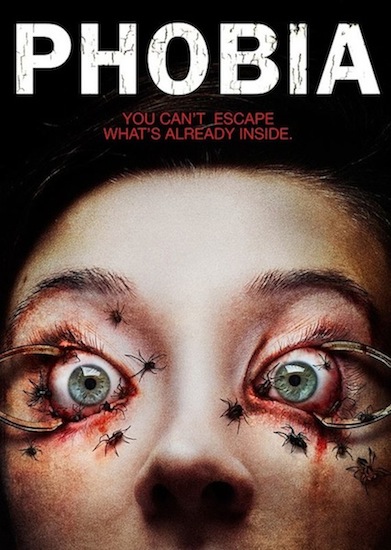 Make it stop!  Make it stop!!!!  Perhaps I’m overreacting because I’m deathly afraid of spiders, but this may be the most unnerving horror movie poster ever. Just glancing at it makes you envision what it would be and feel like to have your eyes forced open while tiny spiders crawl all over them and your face. Shudder.  Kudos to those involved with the marketing for Phobia and I’m not even sure if something like this happens in the actual movie, but based on the poster alone, I’ll be watching.

For those who are interested in seeing and knowing more about Phobia, it will be going the DVD route on November 25th.  I’m always down for supporting the indie horror films, and hopefully Phobia can live up to the hype of the poster. Check out the new trailer below too, but I’m sorry to report that no spiders on the eyeballs are shown.  I’m sure that you all are extremely crushed. 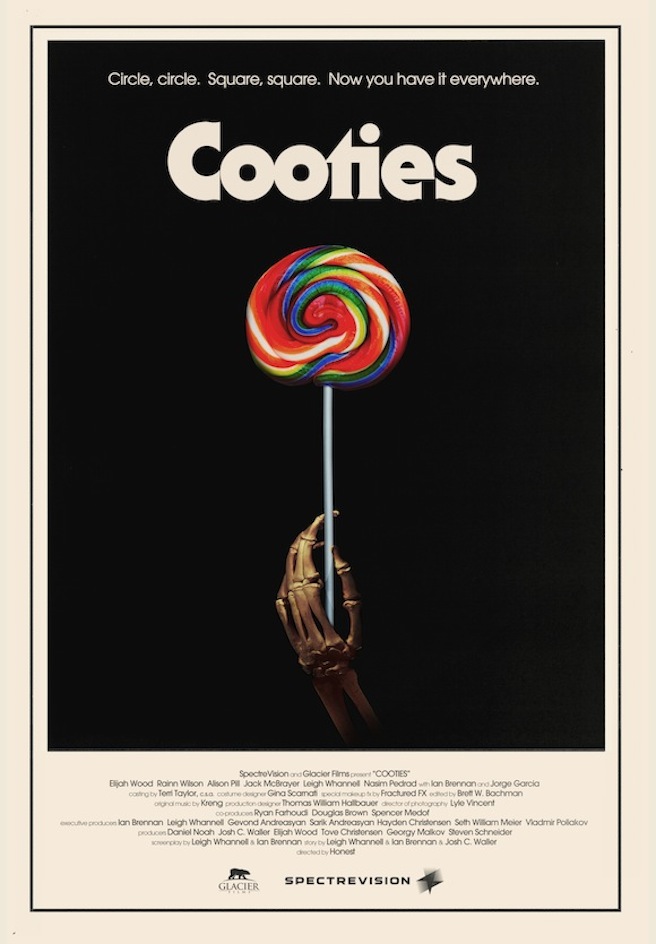 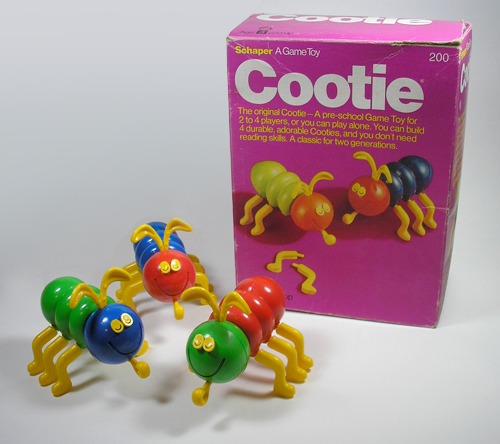 Less than a week left until Christmas, and I bet a lot of you have been procrastinating on buying those presents for your loved ones.  That’s where I come in to save the day!  But only if that loved one is a huge horror fan and only if you have $800 to spend. 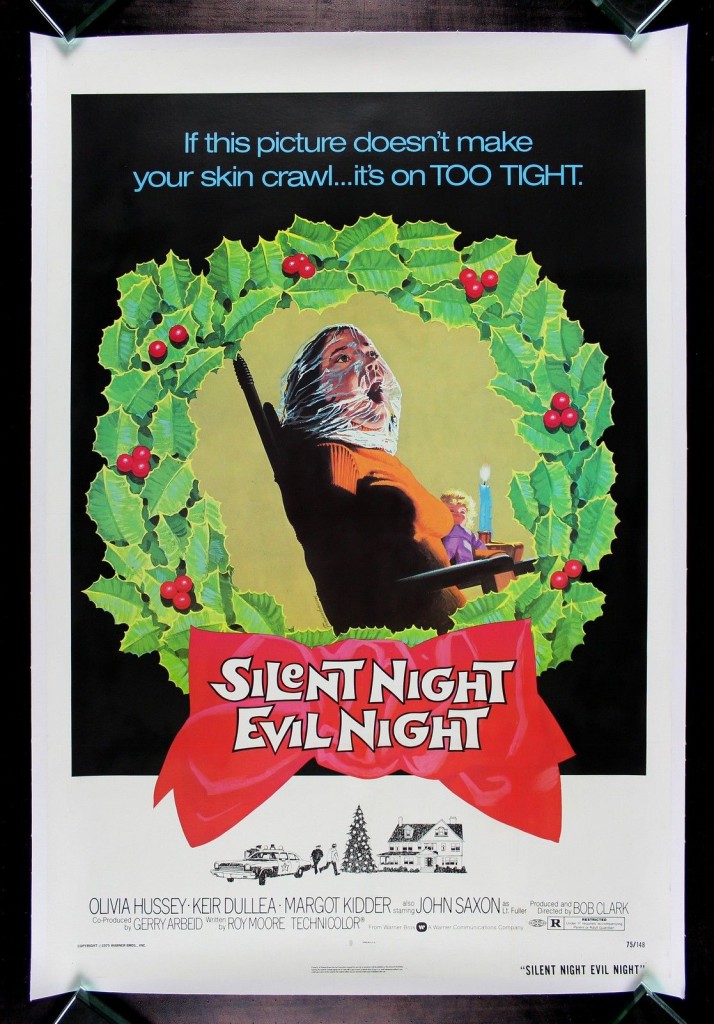 Up on Ebay right now, you can purchase an original U.S. one sheet for the 1974 Bob Clark classic, Black Christmas.  Ask pretty much any true horror fan and I bet that Black Christmas is #1 on their list of Christmas-themed horror movies.  But did you know that it was originally released in the U.S. as Silent Night Evil Night?  And also Stranger In The House for those playing at home.

The poster that is for sale on Ebay is the original with the Silent Night Evil Night title and can be yours for about $800.  A moderately large price to pay for a slice of pretty sweet horror memorabilia.  You can check the listing out HERE, but if that is a little too steep for you, there are 4 copies of the poster for Santa With Muscles for sale at $18 a pop.  Just don’t blame me for the looks of disappointment you’ll get from whoever you give those to. 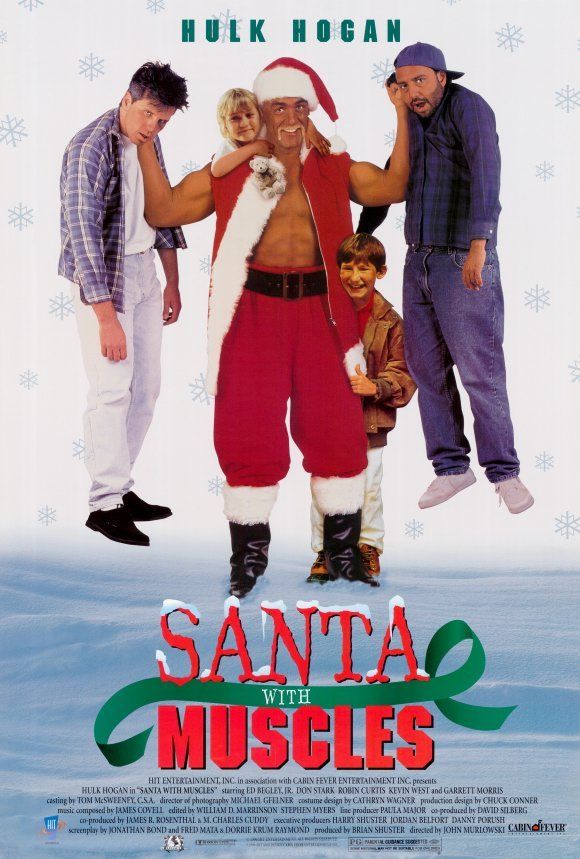