Thank God for YouTube, because someone was kind enough to string together some of Curtis’ greatest hits and quips from the 1981 slasher Bloody Birthday.  Oh wait – who’s Curtis, you ask?  Well, he’s one of the three bratty ass kids causing a ruckus because of a solar eclipse or something.

Bloody Birthday is ridiculous, but fun.  And Curtis’ snarky and sassy ways are a big part of that ridiculous fun.  He’s pretty terrible at shooting a gun btw.  Curtis (Billy Jayne) is one of those horror villains that deserves a nasty demise.  Unfortunately, the worst he gets is wrestled to the ground and tied up by one of Mike Seaver’s friends from the TV show Growing Pains (the one not named Boner).  But anyway, please enjoy the Curtis compilation below!

Well because it’s my birthday today – me, Evander Holyfield and John Lithgow are all taking the day off.  Have no fear, I’ll be back bigger and better than ever next week.  Until then though, please enjoy this compilation clip of all of the death scenes from the not too believable, but highly enjoyable 1981 slasher Happy Birthday To Me.  And in case you have trouble understanding perfect English, subtitles have been provided in the clip for some reason.  Enjoy! 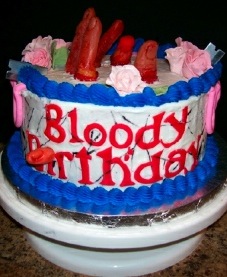