Let me get this off my chest real quick.  If I see one more trailer for a possession/exorcism movie, I’m literally going to rip the hair that I don’t have out of my head.  Oooh look – there’s one coming out (Dark Skies) starring that Felicity chick and maybe it involves some aliens this time?!  Ahhh – and look at that lovely piece of shit trailer for the Last Exorcism Part II (to be fair, I liked the first one).  The ironic mention of that particular upcoming sequel is that Eli Roth is a producer on it, and even though I have little to zero faith in that movie, I have much more invested in Roth’s directorial upcomer, The Green Inferno.  No possessed little girls.  No priests with shocking looks on their faces.  Just some straight up cannibalism.  Fuck yeah! 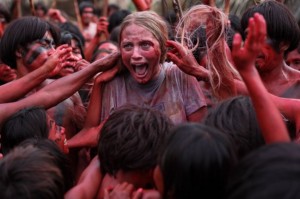 That pic up there is the first released pic from Eli Roth’s, The Green Inferno. The story centers around a group of student activists from New York who decide to travel to the remote jungles of Peru to stage a protest.  Only good things could come from that, right?  Well, they encounter a tribe of cannibals along the way (Debbie Downer sound effect).  Inspired from the sick, but entertaining 1980 splatter classic Cannibal Holocaust and the sequel which was actually known as The Green Inferno, I’m guessing we can expect a lot of eye-covering moments in this one and possibly some intentional or unintentional comedy as well.  I applaud Roth for diving into something different and getting away from the torture porn (even though I’m sure there will be mucho torture involved here).  Since we can’t get a decent revival of the slasher genre, I’ll take some old school cannibalism in it’s place for sure.  The Green Inferno is currently in the post-production stage, so stay tuned for more info on a trailer and release date!

*eye gouge champion of the world*