There are really only two things you need to know about the 2011 sequel Chromeskull:  Laid To Rest 2.  One, it has some of the best onscreen death scenes I’ve ever seen.  And two, somehow Brian Austin Green, from Beverly Hills 90210 and Megan Fox’s vagina fame, is in it.  Not here to talk about David Silver though on this week’s Sunday Bloody Sunday.  Here to talk about one of the best “Fuck Yeah!” gore-filled moments from the film with Detective Holland’s inevitable death scene by way of a double-bladed knife that happens to be stuck in the stairs.

Where the film loses points for plot, it makes up for with pure brutality when it comes to the demise of pretty much everyone who agreed to be in it. Detective Holland (Angelina Armani), after being sliced in the gut, tries to escape up the stairs with Chromeskull following right behind.  It’s there that the double-bladed knife that’s sticking up out of those stairs comes into play. Chromeskull grabs Holland’s head, forcing the blades into her mouth.  Then, with his big ass boot he pushes her head down further, causing the knives to open outward and tear her mouth apart at the same time.  And they say chivalry is dead. 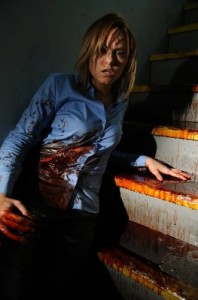 *hell hath no fury like a woman with ruined clothes*

*have a feeling all the guys loved you in high school* 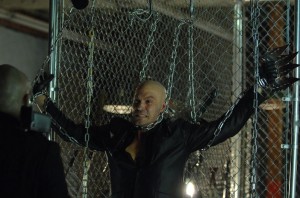 *ok, ok! I apologize for that hip hop album I released in the 90’s* 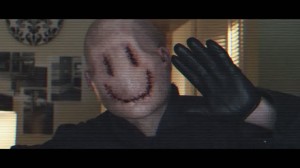