Hey everybody!  Welcome to Vomit Talk.  I’m your host, Seth Brundle!  You might know me from one of the greatest remakes of all time – The Fly!  And today, as the title suggested, I want to talk about vomit.  Yeah, being a fly is tough.  I don’t have any teeth, so I have to find fun new ways to enjoy my meals.  Like…..vomiting!  Remember that time I did that thing to that guy Stathis in the movie?  (audience applause)

Well, let’s reminisce and take a look back at it now!

Hahaha – man, those were some good times!  Don’t worry about Stathis though.  He survived and even appeared in the inferior (but somewhat fun) sequel!  I apologize if my vomiting grossed some of you out while you were eating breakfast.  I’m a fly and can’t help it!  (audience awwwws)

I will say, that I’m still impressed with the effects that were used in this movie, especially for its time, and to this day I think it’s one of David Cronenberg’s best movies.  I’m equally impressed as well with the amount of vomit that came out of my mouth!  (audience groans)

So join us next time on Vomit Talk, where I’ll show you what I’m having for dinner.  Careful if you’re in the first few rows though, you might get wet and disintegrate!  (over-the-top audience laughter and applause) 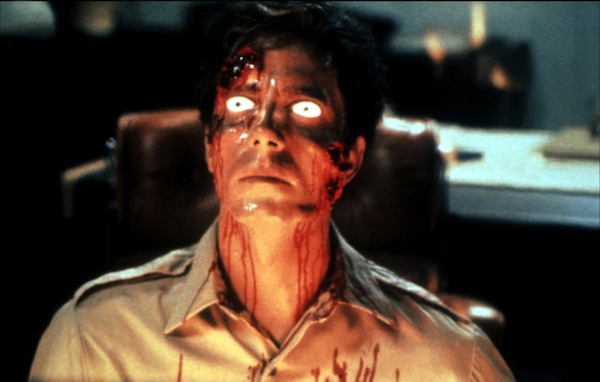 If barf bags are involved in the screening of a horror movie, you know that can only be a good sign.  Trust me, I’m not a vomit fiend or anything like that at all – but there’s something “special” about getting handed a barf bag before viewing time.  Publicity stunt?  Maybe.  Over-the-top promotional gag?  Most definitely.  But when you see the trailer for the new gooey insect horror flick called Bite, you might understand the marketing ploy:

I can admit that I’ve always had a fear of getting bitten by an insect and having it’s eggs be laid inside the wound and inside me.  I still get creeped out by the spider scene from the movie The Believers.  So naturally when I watched the trailer for Bite, I got the willies.  Overall, it seems it won’t win any major points for originality as it looks to heavily borrow from David Cronenberg’s version of The Fly.  Not that that’s a bad thing mind you, but we’ve kind of seen the whole ‘person transforms into an insect’ done before.  I’m looking at you Ticks.  But it’s hard to argue with the fact that Bite is already being praised for using grotesque gooey practical effects to enhance the infected girl’s transformation after she’s bitten on a Bachelorette retreat.

Yes, we’ve talked barf bags – but what about the news that people were fainting and actually vomiting after watching Bite on the big screen during the Fantasia Film Festival?  I actually do believe it, and hopefully I’m not getting roped into some devious and elaborate marketing scheme that will make me wake up one morning with egg on my face.  I do love eggs, but not enough to be humiliated.  I would assume that Bite will be making more festival rounds, especially after the buzz it’s generating (positive reviews are coming in as I type this) and considering that Halloween is coming up soon as well.  Stay tuned for more info and keep the Pepto-Bismol close by!