One of my favorite times of the year is when horror conventions come around, and this year there’s a doozy coming to Los Angeles!  Yes – the Days Of The Dead horror convention will be making it’s return, this time on April 1-3 at the Marriott Hotel in Burbank.

If you’ve ever wanted a photo-op with Tobin Bell from the Saw series, now’s your chance! And if you’ve ever wanted to meet ‘The Gimp’ from Pulp Fiction, now’s your chance for that too!  Personally, I’m actually kind of excited to see the Cobra Kai student/teacher combo of Martin Kove & William Zabka from The Karate Kid.  Not really horror-related, but awesome nonetheless.  Check out the link right HERE for more info and tickets for Days Of The Dead ‘Los Angeles’, and stay tuned for more guest announcements as well.  Oh – follow me on my Facebook page for a chance to win passes too! 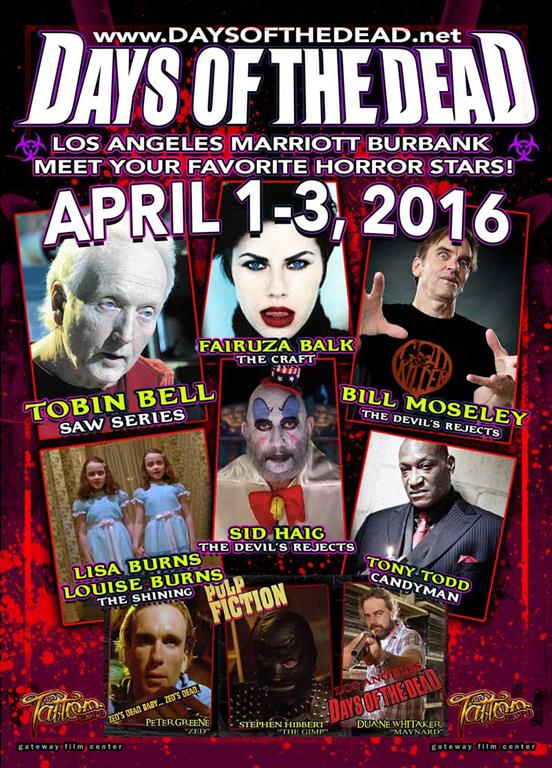 Hooray for horror conventions coming back to LA!  Yes, after Fangoria’s Weekend Of Horrors ceased to exist, there was a void in LA for a good horror convention (no disrespect to Monsterpalooza though, but that takes place in Burbank).  Enter in the Days Of The Dead and that void has seemingly now been filled.  Taking place this past weekend, I was fortunate enough to go Friday night for the opening festivities.  Now I have to give a quick disclaimer before I continue:  due to me having to work the rest of the weekend to help pay the bills, I was unfortunately unable to attend on Saturday or Sunday. Nevertheless, I’m reviewing anyway because I still had a blast!   END_OF_DOCUMENT_TOKEN_TO_BE_REPLACED 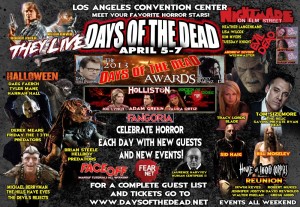