Yes, I am on the one side of the electric fence that feels that this movie is a guilty pleasure, especially around Halloween time and I’ll gladly burn at the stake for thinking that.   END_OF_DOCUMENT_TOKEN_TO_BE_REPLACED

Never before would I have thought that I would use the word “beautiful” in connection with Michael Myers.  But thanks to another amazing product from Mondo, such is the case today.  In correspondence with a special 35MM screening of John Carpenter’s 1978 classic Halloween at the New Beverly Cinema in LA, Mondo artist Ken Taylor has released two special posters for the event.  Check them out below in all of their artistic horror glory: 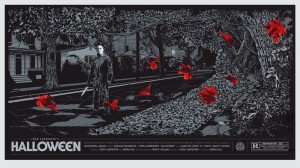 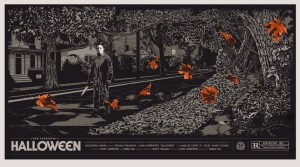 The good news?  You can look at these posters here.  The bad news?  You can’t really get your hands on one unless you buy the VIP tickets for the event for $500 or bid on Ebay once somebody tries to flip it and make $1000.  This special screening of Halloween on October 27th at the New Beverly Cinema in LA will have John Carpenter in attendance and is part of a special Debra Hill Film Festival.  All proceeds from the festival will benefit the late producer’s foundation.  Regular seats are sold out, but a few VIP tix are still available here!