It’s almost time for Halloween!  Only a little more than a month away and we get to see all of the creepy costumes that everyone can come up with to scare all of the little boys and ghouls.  Oh – and we’ll also get to see a bunch of large breasts on display for no real reason, other than to show off some large breasts.  Case in point?  Let’s take a look at this ‘Sexy’ Michael Myers costume:

It actually took me a few minutes to realize that she was actually holding a bloody knife in her hand.  Yes, ladies and gentlemen – that is the ‘Sexy’ Michael Myers costume.  See, it says ‘Halloween’ up on the upper left section of the jumpsuit!  And on the back it has a picture of Michael Myers’ face, so there’s that as well in case you get confused as to what the costume is.  Wouldn’t it be more effective if she was wearing an actual Michael Myers mask over her head and still had her cleavage popping out?  Why wouldn’t she just wear the………oh, right.  She doesn’t want to mess up her hair that took two hours to do.  Got it.

As much as a love sexy clothes on women, I never really understood the ‘sexy horror costume’ phenomenon.  I would get way more turned on if a girl was wearing a Leatherface mask and smelled like she hadn’t bathed in 2 weeks.  Kind of like this costume below! 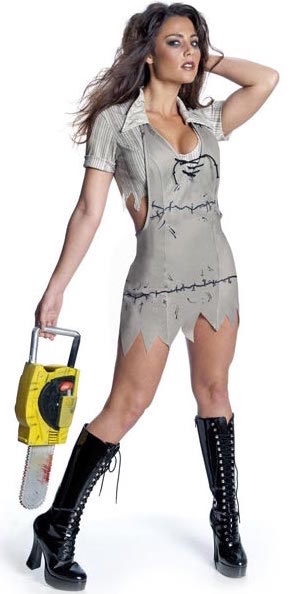 Goddammit.  Nevermind.  There is no hope.  The knee-high leather boots are a nice touch though.  It would be kinda hard to chase victims with your chainsaw in those btw. Anyway, if you want to get your hands on the ‘Sexy’ Michael Myers costume, you can do so HERE and if you would like to be ‘Sexy’ Leatherface this year, you can find that right HERE.  And if you got a boner looking at these costumes, then not only are you easy to please – but I would advise you not to go out on Halloween night because you’ll likely die and/or explode from boner overload.