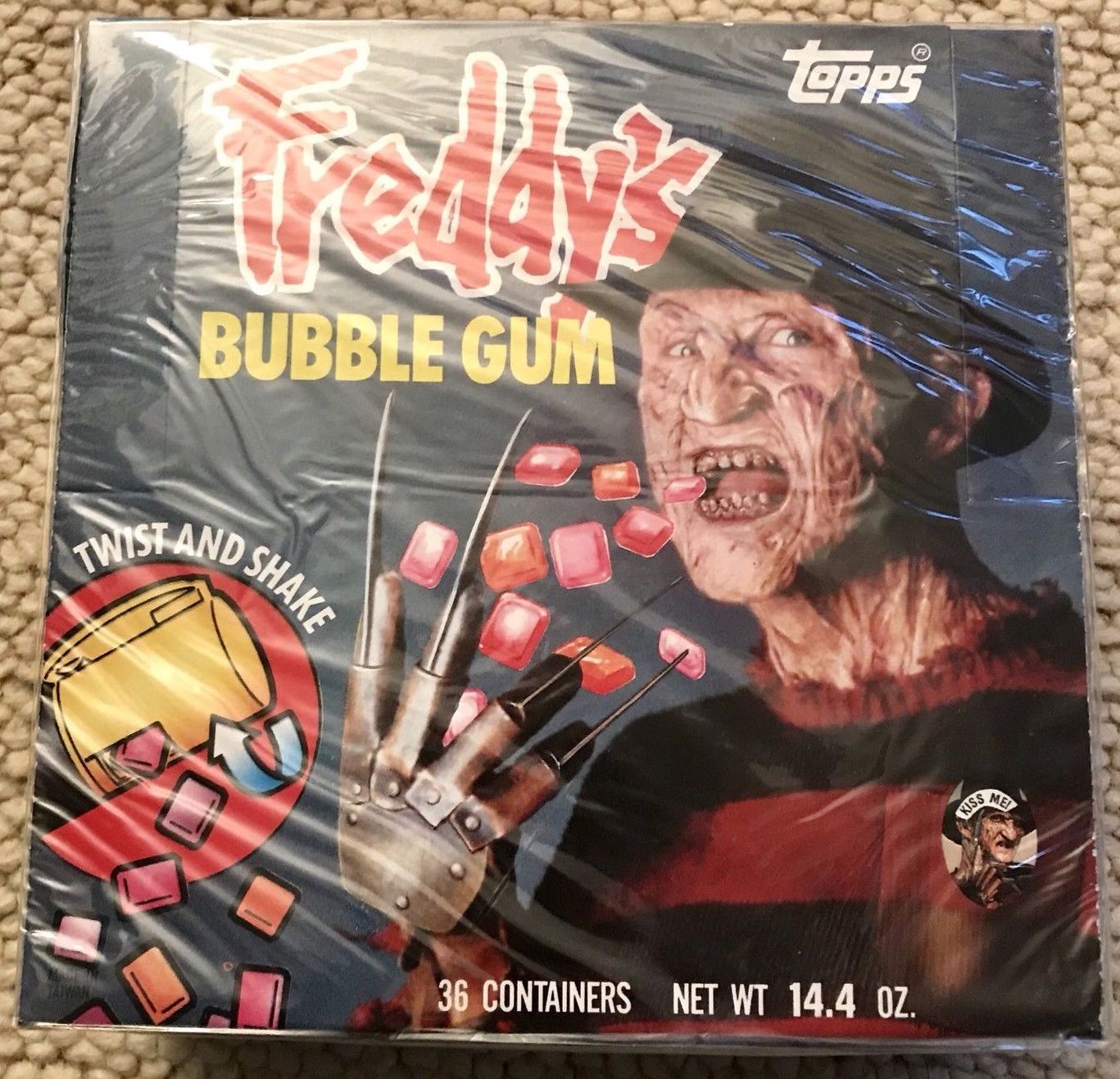 Ahhhh – The 80’s.  A glorious time when if you were on the fence about seeing a horror movie, luckily you had TV spots like the one below to sway you into plunking down your hard-earned money.  Did you ever see the 1986 movie Critters or maybe you haven’t and still want to?  This will steer you in the right direction!  And it’s not phony.  At all!

Now, to be fair – I actually like Critters.  But I don’t necessarily know if it’s a “scream through the whole thing” kind of horror movie.  It is true that they love to party too though! But anyway, TV spots like this were the norm back then – and not just for horror movies. Looking back at them now, it’s a nice slice of nostalgia and things like this always take me back to a simpler time in the horror world.  Kudos to whoever uploads this content btw, because I love having my ‘memory lane’ horror brain jarred from time to time.

Yawn.  Boy oh boy – I sure am having trouble getting it going this morning.  I feel like a zombie, and probably look like one too.  If only there was a workout tape that I could pop in to motivate me that involves horror and famous Scream Queen Linnea Quigley…….oh wait a minute!  There is!  And it came out in 1990!  Yeah, I’m super late to the horror workout party.

Well that was something.  God bless, Linnea and god bless those zombies in the video clip for giving it their all.  But yes, that gem of a clip is from Linnea Quigley’s Horror Workout – released in 1990 to capitalize off of the B-movie horror boom and off of Linnea herself.  Originally released on VHS, it’s a great slice of horror nostalgia and you can now own it in glorious DVD quality!

Head on over HERE and snatch up your copy of the limited (to 1000) DVD and feel the burn as you bounce and stretch along with Linnea and the cheesy synthy 80’s music. Need more convincing by the way?  Hmmmmm…..well how about a clip of Linnea and her hot slumber party girlfriends gyrating and flexing for your enjoyment in unison?  You’re welcome.

Are we really having two Friday The 13th’s in two straight months?  Yes, it’s true and it’s a glorious time for all of my diehard Friday The 13th movie fans out there.  One of my fondest memories of watching this franchise was staying up on a Saturday night and watching the marathon that used to take place on the USA Network on cable.  When I wasn’t staring at USA Up All Night host Rhonda Shear’s breasts (folks who watched know what I’m talking about), I was anticipating some hacking and slashing from the one and only Mr. Voorhees.  So my nostalgia meter definitely went off the charts this morning when I found this old promo on Youtube from one of those marathons.  Check it out below and enjoy!

I still own a VCR.  That’s a true story.  What’s also a true story is that when I was 10 years old, I owned a horror VCR board game called Doorways To Horror.  Ooooooh – sounds scary, doesn’t it?  Here’s a commercial to show just how spine-tingling it really was.

You’ll have to excuse Teen Wolf’s cousin Harry, it was his first time on camera. Yeah, not too scary based off of the commercial and honestly not too scary when you would play the actual game too.  From what I remember about the game though, besides kicking my Dad’s ass every time I played, was that you pop a video cassette in your VCR and pause and play as you move along the board.  There were some Dracula and Witch cards or something that would come into play as well.  You can tell my memory is as fuzzy as the werewolf’s face in the commercial.  But thanks to the wonders of Youtube, my memory is coming back to me – so here is the intro to the Doorways To Horror and some of the gameplay:

If you can tolerate bad puns and equally bad jokes over clips from Public Domain horror movies, then this game was for you!  For a 10-year-old kid who was just getting into horror, it was amazing.  Looking back on it now with the Youtube clips, not so much.  But if you have a hankering for 80’s horror nostalgia, I wouldn’t hesitate to go over to Ebay and snatch one up for a decent price.  You might want to go to the flea market and pick up a VCR first though.

As a huge fan of the TV show Tales From The Crypt, I was pretty impressed to see the following that it gained and the promotional items and merchandise that it pumped out along the way.  Everything from pinball machines to pre-paid phone cards, The Cryptkeeper was doing business!

In addition to all of that, not only did the show have it’s own spin-off cartoon (Tales From The Cryptkeeper), but in 1996 there was actually a Saturday morning kid’s game show called Secrets Of The Cryptkeeper’s Haunted House.  I feel the title could have been a bit longer.  But anyway, yes – this terrible but entertaining show ran on CBS for only one season and actually did feature The Cryptkeeper (John Kassir).  It also featured a horrible CGI skull named “Digger”.  Pay close attention to how smug some of these kids are too. Click below now and watch all of the Saturday morning madness:

There’s something refreshing about hearing the word throwback.  Especially when you’re talking about horror movies.  My ears perk up like an excited dog, because I immediately transport myself back to the days of old, musty smelling, small town VHS rental spots where everybody knew your name.  Kind of like Cheers, but with dingy clamshell VHS cases instead of frosty beers. And the new Sci-Fi/Horror hybrid, Almost Human, is the definition of throwback.   END_OF_DOCUMENT_TOKEN_TO_BE_REPLACED

I love me a good horror movie that’s set in a movie theater.  The 1985 Italian gorefest Demons easily being my favorite, but one not far behind is a little genre gem called Popcorn.  Never heard of it?  You might not be alone.  This post however, is about posters and the Popcorn poster graced my eyes back in 1991 at my local Mom & Pop video store. 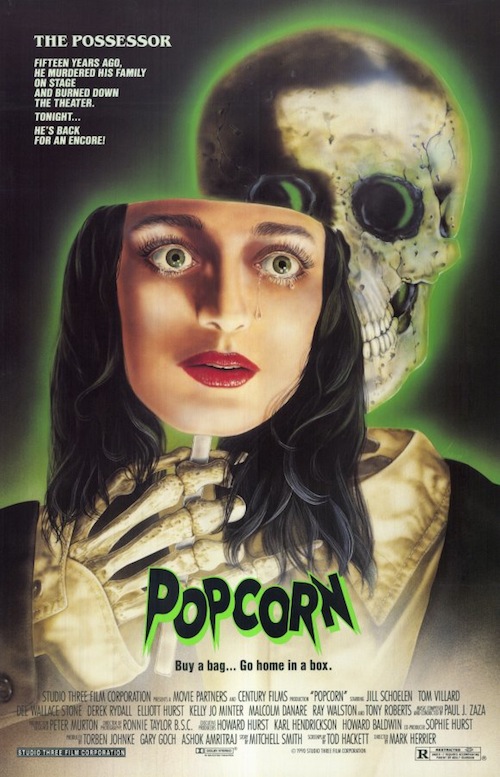 Let’s talk taglines here.  ‘Buy a bag…Go home in a box.‘  That right there folks is part of what’s missing in horror movies nowadays.  Sure, it’s cheesy, but therein lies the charm.  And if you’ve seen Popcorn, you know that it’s full of charm.  Some might say it’s full of something else, but I digress.

I’ve said it before:  throw a skull on a poster and I’ll most likely be down no matter what.  And the Popcorn poster uses the skull wisely, managing to pull you in and give you a 50’s horror vibe at the same time.  I dig the mention of ‘The Possessor’ storyline in the top left corner as well. Overall, I just love the nostalgic feel of this poster!  Seek the movie out (it’s up on Youtube and I recommend it) if you will, or just gaze at the delicious artwork above to get your Popcorn fix on.  And throw some extra butter on it while you’re at it.

Thanks to FearNet, I stumbled upon this video that artist Trent Shy put together of some memorable 80’s horror movie scenes.  That catch is that they’re all in glorious claymation form!  Mr. Bill would definitely be proud.

Not only are some of your favorites like The Fly and The Blob on display here, but also some that are a little more obscure and surprising (in a great way) like From Beyond and Brain Damage.  To sweeten the claymation pie, you even get some Gremlins watching and enjoying the clips like only Gremlins could.  So if your dream this Friday was to see a claymation version of Belial from Basket Case, then click the link below!

Here’s a nice piece of horror nostalgia for you.  In 1988, Topps released a horror trading card set called Fright Flicks.  Each pack contained 9 cards, 1 sticker, and 1 stick of non-chewable bubble gum.  And tomorrow on my Dirty Horror Facebook page, I’m giving away 12 unopened original packs!  I’d stay away from the gum though since it’s almost 25 years old.  To win, just make sure that you ‘Like’ my page HERE and wait for me to put up a pic of one of the cards tomorrow and ‘Like’ that pic.  Winner will be picked randomly, so anyone can win!  I can only ship to the US though, so I apologize to my out of state readers.  Good luck! 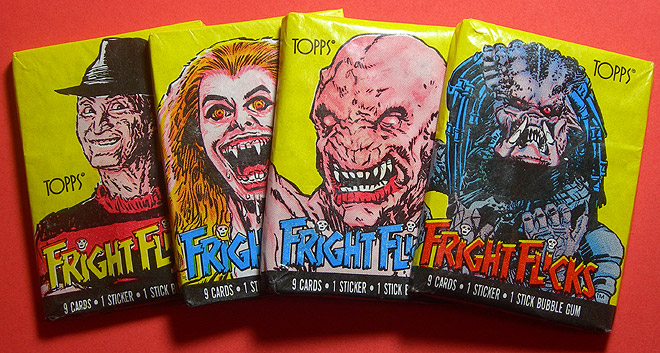