Who woulda thought that I would get my ‘horror fix’ this week from a hip hop music video? That’s exactly what happened when I watched the new video by J.I.D. for his song “151 Rum“.  The rapper, held captive by a homicidal maniac with bubbling sores who likes cheeseburgers, is forced to record music while being chained up and bloodied.

J.I.D. is an upcoming rapper, with a flow reminiscent of Kendrick Lamar at times and is signed to fellow rapper J. Cole’s record label.  The song “151 Rum” appears on J.I.D.’s album DiCaprio 2, and honestly the video has made me take notice even more than I had before.  Gotta love the creepiness and often frantic camerawork on display, and kudos for the super dark ending.  Watch below because it’s honestly better than most full-length horror movies that are coming out nowadays……

Quick!  What’s the best music video that has zombies in it from the 80’s?!?  Most of you just shouted out Michael Jackson’s ‘Thriller‘ which was not only rude, but also incorrect.  Now kindly stop throwing tomatoes at me.  Ok, now that you got that out of your system, I am here to tell you that the answer is definitely ‘Jeopardy‘ by The Greg Kihn Band!

Now before we get onto the feature presentation, let me just tell you that this video is probably one of the reasons I became addicted to MTV in the 80’s.  This one and ‘Legs‘ by ZZ Top of course for obvious reasons.  Is the video dumb with bad acting and bad effects?  Yes.  Is that what makes it amazing though?  Yes and yes.  As an early fan of horror, I was drawn to the horror aspect of it (the skeletons, zombies, giant worm creature, etc) and looking back at it now, it was actually pretty impressive for it’s time.  The video as a whole is basically warning you that marriage sucks btw.  Some fun things to look out for in the video:

*  The priest’s ‘finger in the hole’ sexual innuendo

*  The best guitar playing with a piece of wood ever

*  The bride looking kinda hot with her Pat Benatar hair

Now enjoy the video for yourself and don’t get married:

Ahhhh.  That lovely feeling of a Monday morning.  And that feeling is something between getting drilled on at the dentist and having diarrhea.  Case in point:  Mondays pretty much suck.  But what would make this Monday a little better?  How about a horror-influenced video with tons of creepy-ass imagery from Marilyn Manson?

Oh yes – one of my favorite music videos ever and it makes you appreciate the misunderstood Marilyn Manson just a little bit more, doesn’t it?  From his 1996 breakthrough album Antichrist Superstar, the video for the song Tourniquet is your worst (in a good way) haunted house come to life.  Not to mention that you probably feel the need to shower after watching it.  Happy Monday, everybody!

Haven’t done this post in a while, and what better way to kick it back off than with the new horror imagery filled video from Slipknot called ‘The Devil In I‘:

While I don’t like this particular song better than the band’s first single, ‘The Negative One‘, off the upcoming album .5: The Gray Chapter, I definitely don’t hate it and honestly love the video from a horror fan’s standpoint.  We get red sheeted ghosts, creepy crows, the essential biting off of appendages, a face peeling that would make Poltergeist proud, and a disco ball!  The obvious underlying symbolism is that Slipknot is going through a transformation based off of events that have happened in the past few years, complete with some impressive new masks to round that transformation out.

Aside from seeing everything in the video for ‘The Devil In I‘, you can witness the new look and hear the new album (out October 21st on Roadrunner Records) on Slipknot’s new upcoming tour – kicking off in San Bernardino, CA on October 25th and 26th for the band’s amazing Knotfest festival.  For the full lineup of Knotfest and info on how to grab some last minute tickets, go click HERE now! 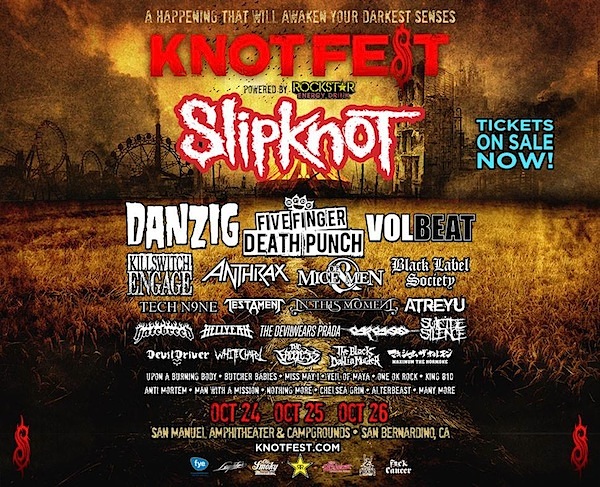 Yawwwwwwn.  It’s hard sometimes to get me out of my Monday funk.  But luckily, some good heavy metal usually does the trick.  Add some horror into the mix and it feels like a 3-day weekend!  And one of the originators of the metal/horror hybrid was of course Ozzy Osbourne, and more specifically his video for the single ‘Bark At The Moon‘.  So, let’s take a trip back to MTV in 1983 and reminisce on this fine Monday morning:

Yeah, that video used to scare the shit out of me as a kid.  And truth be told – the werewolf makeup effects used on Ozzy are ten times better than a lot of crap put out today.  So, isn’t your Monday a little better now that you were able to watch werewolf Ozzy Osbourne with some heavy metal guitars shredding in the background?  All is right with the world…..until next Monday.