Here’s a tip for you youngsters:  When you get older, you’re going to start getting a complex and will reminisce a lot more about the good ol’ days.  Don’t fear it.  Just embrace it.  And since I’m 40 now, I do a lot of that reminiscing.  So I’m sitting here on a lazy Sunday and just remembered that I used to have a pen when I was little that had fake blood in it that apparently was supposed to be a vampire bat.  And those pens were called Blood Suckers!  Here’s a terrible quality commercial from Youtube:

I’m pretty sure I terrorized kids at school with these and might have even gotten yelled at by a teacher or two.  And it didn’t help that they were Rated PG:  Pretty Gross!  Haha – that cracks me up.  But anyway, I’m now on a search for one of these because I love to collect things from my childhood and try and forget that I’m officially over the hill.  It’s those little things that can make a difference.  So if anyone gets a tip on where to grab one of these Blood Suckers for a decent price (I scour eBay on the regular), then hit me up.  Until then, I’ll keep reminiscing and think back to a simpler time when I was a 7-year-old boy frightening little kids at school with my pretty gross vampire bat pen. 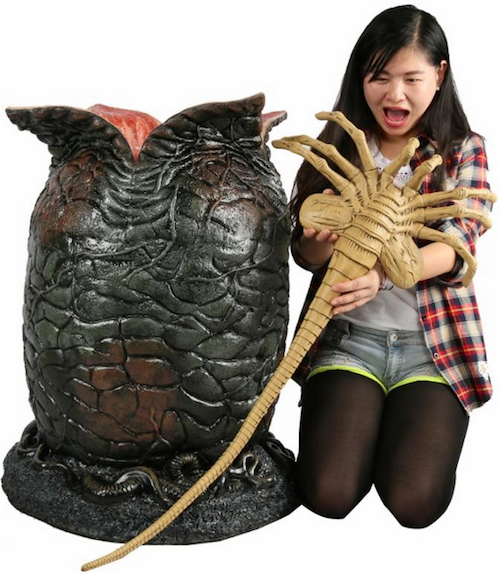 I remember being a jealous 10-year-old boy in my small Indiana neighborhood.  While I was at home playing with my boring Etch A Sketch, the kid down the street was pulling the eyeball on his Rude Ralph.  And no, that’s not code for something else.  He was literally pulling the eyeball on a toy named Rude Ralph and hearing it make gross and disgusting noises.  Oh the envy I had of him and his newfound ugly toy friend.  I wanted to hear something make gross and disgusting noises other than my sister.

So what exactly was Rude Ralph?  Think of it like a Madball on steroids that belched and farted.  And if you don’t know what a Madball is, then please take your eyes elsewhere.  Rude Ralph came out in 1986 and didn’t last very long due to the complaints of snooty parents.  Hence why you have to shell out a decent amount of dough on eBay to snag one now.  If you’re still curious and a bit in the dark of what Rude Ralph was, please take a look at the old commercial below.  Oh – and it has a special bonus appearance from the Breath Blasters!

My Mom didn’t like me playing with Play-Doh when I was a kid because I would always try and eat it.  Sure, it looked appetizing due to the different colors and interesting texture, but apparently it’s not good for your digestive system.  Much to her chagrin though, in 1984 I was already getting into my horror phase and Play-Doh must have known, because they released the awesome Count Creepyhead & Friends Play-Doh Playset. 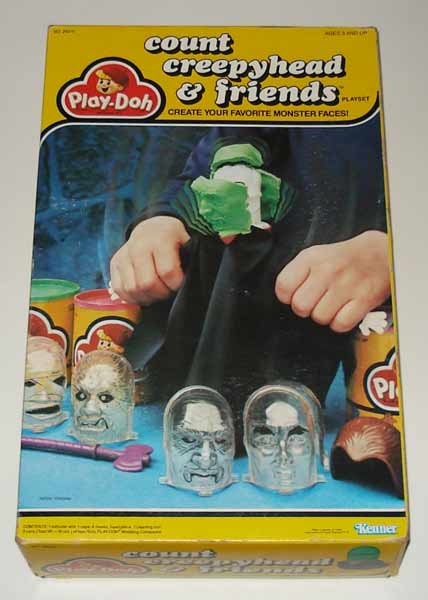 Oh I had hours and hours of fun with this playset, until the next distracting toy for an 8-year-old came out and Count Creepyhead got tossed into the closet with He-Man.  You have to love the fact that especially in the 80’s, the horror toy business was booming and it was more than refreshing to see Play-Doh jump on board. Writing about this pulled at my nostalgic toy heartstrings and made me search Ebay to see if any of these babies were for sale.  Sadly, all you can buy that’s associated with Count Creepyhead is a purple scraping axe that came with the original package.  No offense to the purple scraping axe, but that alone just doesn’t satisfy my craving.  So until Count Creepyhead pops up on Ebay…..I shall wait.  And while I wait, I can just watch this commercial to get my fix and see how much fun the kids are having in it.

Catchy little jingle in that commercial.  Madballs were all the rage for about a year or two and actually made a comeback in 2007.  They even spawned comic books, video games, and their very own cartoon.  I have fond memories of taking my Madballs to church with me, which might be sacrilegious to some and awesome to others.  I even still have my original Screamin Meemie on the premises and he’s resting comfortably in my closet as we speak.

Madballs were so popular in the 80’s, they even had their own crappy knock-offs that to this day earn more money than the originals on Ebay auctions.  That’s right – if you find a Blurp Ball, Weird Ball, or Wacki Ball at the flea market, make sure you pick it up because it could net you some sweet cash if you do.  The bottom line is that Madballs were about as 80’s as 80’s toys could get.  And they added a horror element as well, which made them a necessity for me.  I tried to pass my collection down a generation to my nephews, but they were scared shitless of them.  Pshhh.  Kids nowadays.

After artist Aaron Moreno released his Farmer Vincent ‘Motel Hell‘ figure via a special lottery a while back, I thought that I had seen it all as far as what he would come up with next.  And then I get wind that Aaron and his Retroband brand have taken it straight to the sewers and to 1984’s guilty pleasure of mine, C.H.U.D. for his next release. 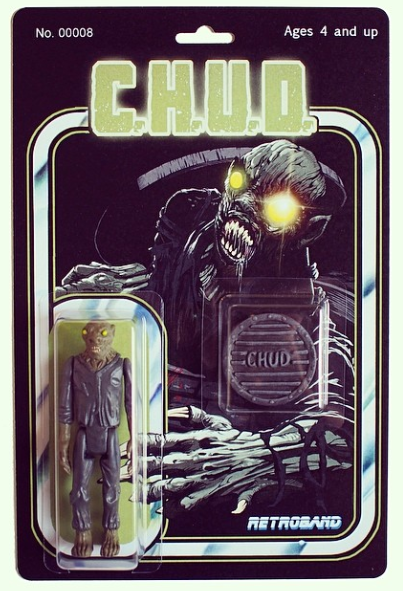 The figure has been unveiled and looks great!  It even has UV glowing lights and the package card alone is enough to get the excitement juices flowing!  In the past, Retroband’s figures have been very limited, but no word on how limited this C.H.U.D. release will be or how much it will cost. EDIT:  55 figures will be available at $80 a pop.  They go on sale today (4/30) at 7PM CST so follow Retroband on Instagram for more details HERE. 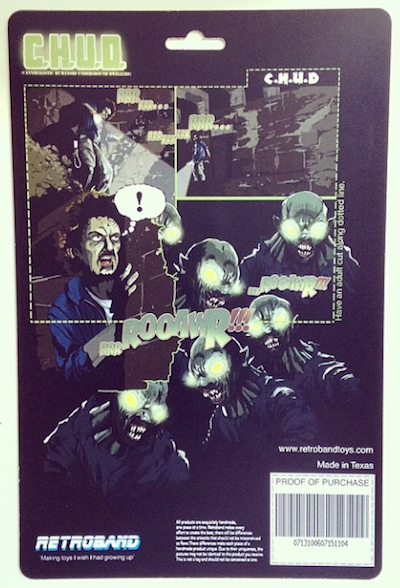 Yes.  You read the headline correctly.  The man/company that I brag and boast about on my site, Retroband, is releasing an action figure based on the Farmer Vincent character from the 1980 B-movie classic, Motel Hell. 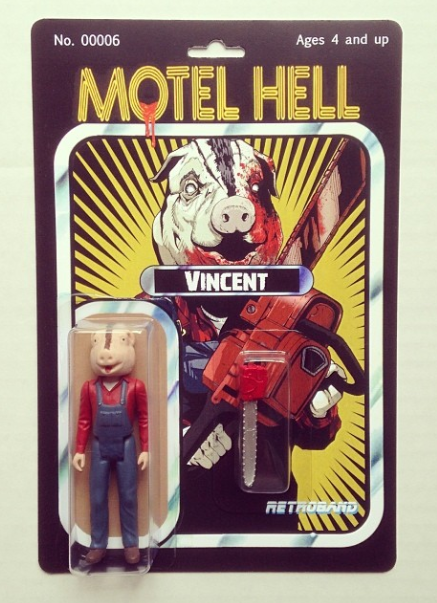 Not much more needs to be said really.  If you’re not impressed by that, you deserve to be castrated.  A little extreme?  Possibly.  But the work that Retroband keeps churring out is pretty impressive, so a castration seems fitting if you don’t like this Motel Hell action figure.  This piece is very limited, as are all of their products, so good luck trying to snag one.  Stay tuned to Retroband’s Instagram page HERE for updates on how to get it and for details on future releases as well!