It’s always good to remember where you came from.  And luckily, long-time metal powerhouse Lamb Of God have done just that.  For those who don’t know – before frontman Randy Blythe joined the group, Lamb Of God was known as Burn The Priest. Shortly after Blythe put his stamp on the crew, they changed their name and went on to form a metal legacy that continues on today.  But as I stated at the start, you should never forget where you came from – so Burn The Priest has reformed 20 years later to deliver a brand new album full of covers called Legion: XX, featuring tracks that influenced them when they were starting out!

The album kicks open the front door with a cover of ‘Inherit The Earth‘ by 80’s thrash band The Accused.  It’s a different vocal style you may be accustomed to hearing from Blythe, but one that will grab you by the balls and not let go (don’t worry, it won’t feel too uncomfortable).  Mark Morton’s guitar is the co-star of ‘Inherit the Earth‘, ripping and shredding it’s way through the track – which by the way, when it ends…..you want more. Up next is a cover of ‘Honey Bucket‘, one of my favorite songs from The Melvins.  From there, Burn The Priest put their personal  touch on tracks from Bad Brains, Ministry, Agnostic Front, S.O.D., and more.

Even if you’re not necessarily a Lamb Of God fan, you will find something on Legion: XX to sink your metal teeth into.  I personally gave the album the ‘road trip’ test last weekend. I was never bored, and it helped me deal with the aggression that was building up from the idiotic California drivers while on my journey.  Case in point:  I fully support this new Burn The Priest project, even if it is just a project of 10 cover songs.  It’s a bit of a tease, but the good kind of tease.  Slap it in, hit play, and let it go…….you won’t be disappointed.

Crossing things of my bucket list is fun.  And I got to cross another one off the other night when I finally saw Lamb Of God at The Forum in Los Angeles for the first time.

Been a fan for a while, so I was amped to see what they had in store for the LA crowd.  And minus a few mic issues (f*cking sound guys) at the start of ‘Laid To Rest’ to open the show, the boys pummeled the crowd with 10 songs – raising the intensity with each one.  Randy Blythe is a force onstage – and to me, that’s one of Lamb Of God’s strong points as a live band.  The heavy riffs, the booming drums…..they’ll always be there.  But it’s Randy’s energy and interaction with the crowd that makes the experience hit you even harder.

On the band’s closing song ‘Redneck‘, Randy encourages the crowd to get the biggest circle pit going that The Forum has ever fucking seen.  And from my vantage point, they may have succeeded.  Great show.  Great energy.  And oh yeah, Slayer was there too.  HORNS UP!

Has your life been boring lately?  Have you felt the need to get some aggression out?  Are you tired of the current establishment that’s going on in our country right now?  If you answered yes to at least two of those questions, then I have the cure to what ails you: Slayer!  Lamb Of God!  Behemoth!  Yes, those three monumental metal bands are headed out on a US tour this summer – starting July 12th in Bemidji, MN: 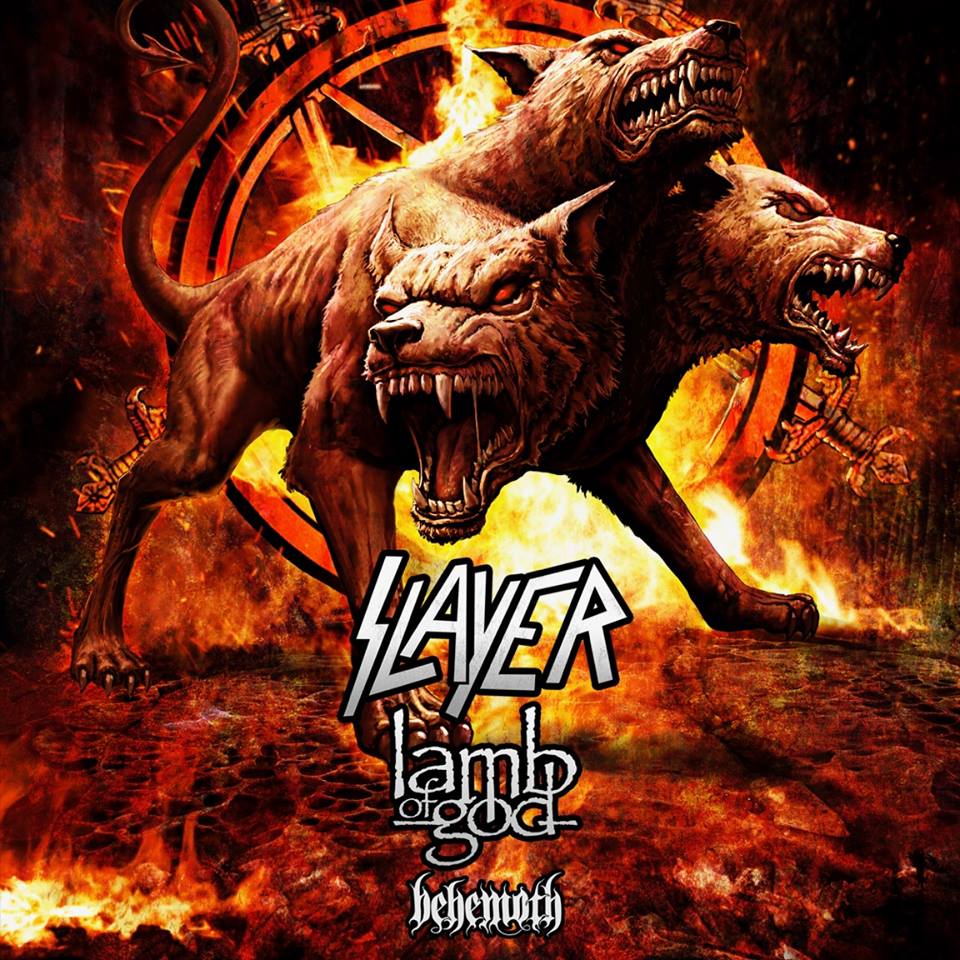 Yeaaaaaah!  Nothing like an angry Cerberus guarding the ‘Gates Of Hell’ on the flyer to get you even more in the mood for this tour.  Now, personally speaking – I’ve seen Slayer more than a few times…..but it’s actually Lamb Of God that I’m most amped to see because I have unfortunately never experienced them live.  If you want to see if this metal trifecta is heading near your town, then you can go to Slayer’s website HERE or Lamb Of God’s HERE for more info.  Do your part and keep live metal alive and snatch up those tickets!  Devil horns up!!!!!