Due to reasons beyond my control (writer’s block), I give you Monday Bloody Monday instead of the usual Sunday Bloody Sunday this week.  Just look at it as if you’re getting a present the day after Christmas or something.  Do you hear that catchy jingly music playing in the background by the way?  No – not that repetitive Dubstep crap that’s all over the radio, it’s The Ice Cream Man! Oh how I loved to hear the music of my small town Ice Cream Man coming up the street.  It prompted me to beg my Mom for a dollar, then go buy one of those delicious ice cream frogs with the gumballs for eyes.  Now had my local frozen treat supplier looked like Clint Howard, my Mom may have been a little less likely to give me that dollar.

Yep, talking about the 1995 Direct-To-Video classic (yes, it is a classic if we’re talking Direct-To-Video status), Ice Cream Man, starring everybody’s not so good looking brother, Clint Howard.  The movie is ridiculous, but in an enjoyable guilty pleasure kind of way, and it sports some somewhat inventive death scenes that mostly revolve around severed heads.  Most notably, a scene involving the lopped off noggin of genre star, David Naughton (An American Werewolf In London).  It’s the perfect midnight movie, so search it out if you haven’t seen it and witness what I believe is Clint Howard’s finest hour. Although his transformation scene from Ticks is nothing to sneeze at. 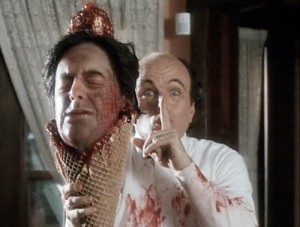 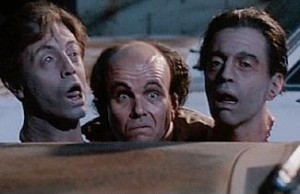