Back in the day, I was a VHS renting madman.  That sounds a lot more ominous than it is.  Basically, I’ve rented a lot of horror movies in my lifetime – more specifically from the 80’s and early 90’s when renting movies was actually a thing.  But there were always those movies that eluded me for one reason or another.  I could never quite pull the trigger and rent them.  And because of that, I’ve had regrets that haunt me in the deepest channels of my mind.  Maybe not that dramatic, but regrets can still be a bitch.  The next movie on the rental regrets list:  The Supernaturals. 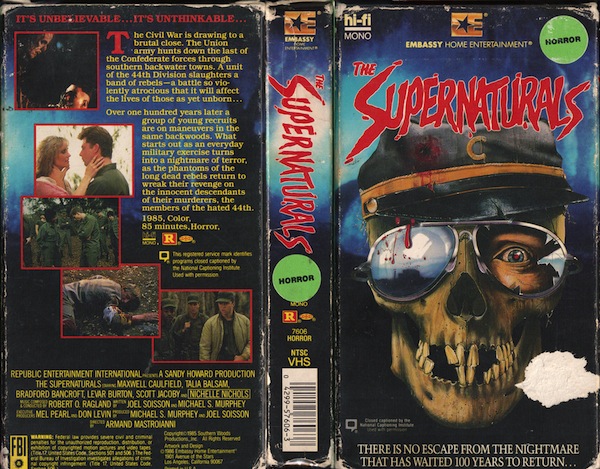 That’s still one of the best looking VHS covers of all time in my book.  So why didn’t I ever rent The Supernaturals?  Possibly because there wasn’t enough gore on the back of the box.  I do like my gore.  Or maybe because I was prejudice against Civil War zombies? Who knows.  The story itself sounded simple enough:  Rebels were slaughtered during The Civil War and over one hundred years later, those rebels come back to get revenge on the innocent descendants of their murderers.

The bad news is that The Supernaturals has never seen a proper DVD or Blu-ray release.  The good news is that the VHS rip of the film can be seen on Youtube if you search for it.  So guess who’s going to be watching that VHS rip while drinking a beer or two very soon?  This guy!  That’s right – I don’t want to hold onto these regrets for too long. If you’ve seen this movie, feel free to share your thoughts.  I do know that LeVar Burton of Reading Rainbow and Star Trek: The Next Generation fame is in it.  But even more random is that Maurice Gibb of The Bee Gees is also in it.  The hell you say?  Oh wait – I have proof!