Talk about blowing your load too early.  2002’s Ghost Ship did just that.  I remember the first time I saw it and I was in definite “Holy Shit!” mode after seeing the opening scene.  It was jaw-dropping indeed, but then after it, I think watching some Sea Monkeys have sex would have been much more entertaining.

So this week on Sunday Bloody Sunday, I’m giving you the opening scene from Ghost Ship where a lot of partygoers get sliced in half by a wire cable.  The scene gets a lot of cheers, but also a lot of boos afterwards because the rest of the movie turns into complete shit.  This also marks the first time that I’ve put a video up on Sunday Bloody Sunday because the point usually is to give you the scenes in picture form, like the good ol’ days.  I like to keep you on your toes though, so rejoice below with me in what is hands down one of the best opening horror movie scenes ever!  Gotta love the shot of the one woman reaching over to her severed lower half, trying to somehow put herself back together.  Silly broad. 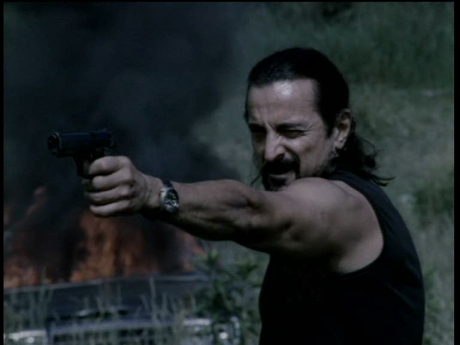