One of my biggest fears is having my eyes gouged out of their sockets.  Mostly because it would hurt like a sonofabitch, and also because it would mean that I wouldn’t be able to see.  And I kind of need to see.  But anyway, it you get your eyes gouged just right…..and in the process get some bones broken……you wouldn’t need to worry about seeing, because you would most likely be dead.  Kind of like that guy in the hospital in Halloween III: Season Of The Witch!

Quick sidenote:  I love this movie.  But moving on to this edition of Sunday Bloody Sunday, yes we’re talking about gouged-out eyes.  Aside from being known for the masks and Silver Shamrock jingle, Halloween III had some pretty sweet death scenes.  And when shop owner Harry Grimbridge thinks he’s safe in the hospital and a mysterious stranger comes into his room, one of those pretty sweet death scenes occurs.  And we get a bonus death somewhat afterwards in the form of gasoline and a lighter!  Btw – how rude is it to wake up Tom Atkins while he’s napping?!?  Ughhhhhh.  Watch it below.  Happy Halloween!! 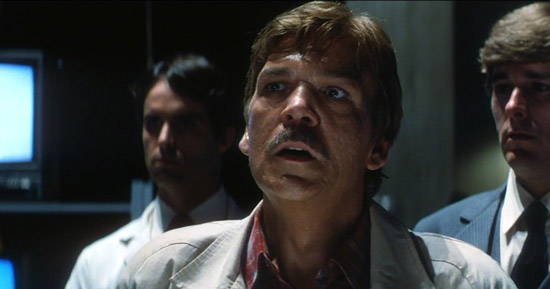