Wait.  What’s that?  Is that 2019 creeping in already?  Calm down, 2019.  We still have unfinished business here in 2018.  And by unfinished business, I mean hearing my Best & Worst Horror Movies Of 2018!  I know, it’s all very exciting.  Let’s get into it and start with the worst first!   END_OF_DOCUMENT_TOKEN_TO_BE_REPLACED

Hooray!  Strike up the band!  Bust out your favorite dance moves and pay homage to Rerun from What’s Happening!  The word on the sewer-ridden street is that the upcoming planned remake of Suspiria might be in some serious legal trouble.

Director David Gordon Green (Pineapple Express) said in an interview with Collider that “Suspiria is caught up in legal crap, so who knows what will ever happen with that.”  He also goes on to say that he feels like this remake could fall into the “I’d like to make that movie, but it may never happen” category.

I hold Dario Argento’s 1977 classic in high regard.  Sure, the story is a bit ridiculous.  But it’s a visual masterpiece.  And has a soundtrack that perfectly fits that visual masterpiece.  So, in my mind, this remake should die now. Leave it alone.  I had a discussion last night with my podcast friends about whether or not Re-Animator should ever be remade and the more I think about it, it should definitely be left alone too.  I’m tired of remakes.  I really am. And I’m sorry, but to make the taste in my mouth more sour, we have a director (David Gordon Green) who has never done a horror movie before and instead has given us The Sitter and Your Highness.  So please let this remake of Suspiria die, and let’s all go home and pop in our DVD (how the hell does this movie not have a proper Blu-Ray release btw?) and enjoy seeing a blind man get murdered by his dog. 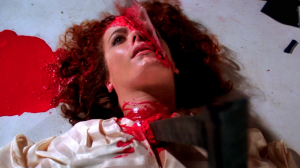 *cause you had a bad day, you’re taking one down….*