Can you feel that in the air?  It’s love!  Because Valentine’s Day is only about a month away!  Yeah, yeah.  It’s a fake holiday.  But, why not cuddle up with that special someone this year and put the soundtrack from the 1981 slasher flick The Prowler on the ol’ turntable and wait for the magic to happen.  Oh you didn’t know??  Waxwork Records has released Richard Einhorn’s score to the beloved Tom Savini effects heavy film (some of his best work in my opinion) on double ‘army green/rose petal splatter‘ vinyl! 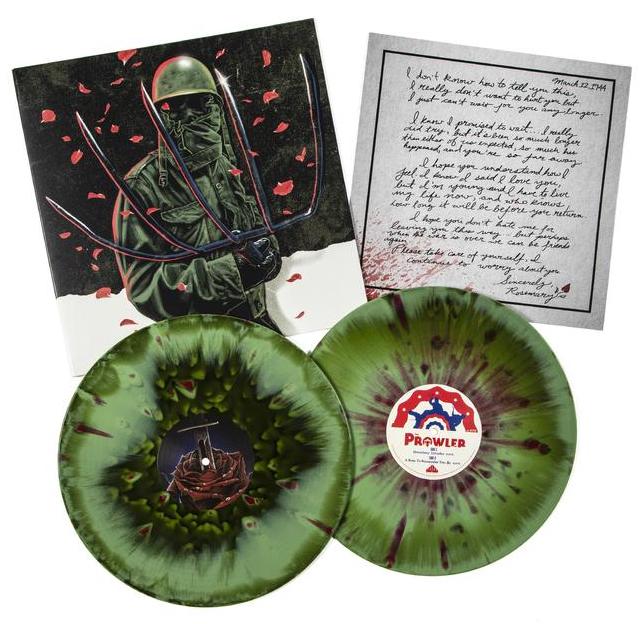 It’s glorious!  Oh, I forget to mention a very important tidbit:  The ridiculously good artwork was done by none other than Ghoulish Gary Pullin!  Also included is a printed insert featuring Rosemary’s break-up letter (the movie also goes by the title Rosemary’s Killer btw).  So, if you’re looking for a somewhat romantic gift (there are rose petals on the cover) for that horror-lover in your life……head on over to Waxwork Records HERE to pick it up!  Speaking of head, let’s enjoy this clip below for my favorite kill in The Prowler:

With Valentine’s Day right around the corner, I figured I’d get the romance started with an exploding head from the 1981 splatterific slasher movie The Prowler.  Flowers and chocolates are pretty much overrated anyway, so exploding heads are the way to go nowadays.

Welcome to Sunday Bloody Sunday, where as I’ve already mentioned – I’m shining a spotlight onto an exploding head from The Prowler.  But who’s exploding head is it?  Well…..therein lies the rub.  It’s a scene from the end of the movie, so if you haven’t seen it – then this would be considered a big spoiler.  That being because the exploding head is that of the revealed killer!  Dun Dun Duhhhhhh.  Yeah, it’s kind of like a super graphic Scooby-Doo ending.  But anyway, click away below and you’re been warned if you haven’t seen the movie!  P.S. – Kudos to Tom Savini for the FX work.