Growing up, I pretty much lived at the video store.  Mind you, this is when VHS rentals were all the rage and I was raging like a motherfucker.  I would rent five, sometimes even ten horror movies at a time and just binge watch.  There were always some movies that slipped through the cracks though and I never bothered to rent them.  1988’s Slaughterhouse Rock was one of those: 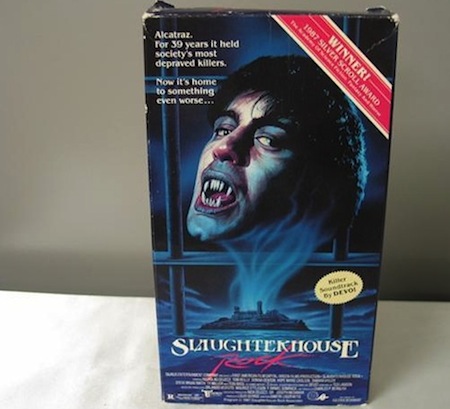 Wait.  It had a killer soundtrack by Devo?!?!  Goddammit.  I think what always threw me off about this movie was the title.  I wasn’t much into showtunes back then and still am really not today, so the name Slaughterhouse Rock made me think that there was going to be a lot of fingersnapping and dancing going on for some reason.  Perhaps I was hasty with my decision, especially after finding out this clip below on Youtube that I’m assuming is a part at the end of the movie that decided to include a compilation of some of the awesomeness that occurred earlier.  Or maybe it was foreshadowing which wouldn’t make much sense, because then you would already see things that were going to happen and that would ruin the surprise, you know?  Oh who cares – just watch the clip:

I know what you’re thinking.  That woman who was doing the resurrection of the soul dance looks awfully familiar.  Come to find out that it’s none other than Toni Basil!  Who the hell is Toni Basil, you ask?  Oh, she only had one of the biggest songs from the 80’s called “Mickey”, that’s all.  Apparently he was so fine that he blew her mind.  But anyway, she’s in Slaughterhouse Rock and Devo has a killer soundtrack on it.  That’s full blown 80’s overload if you ask me and more than enough to make me hunt this down and watch it.  No DVD/Blu-ray version exists, but there is a full Youtube version up online if you’re like me and want to bust your virgin Slaughterhouse Rock cherry.