So I’m sitting down and eating some Gorton’s battered fish the other night, and it got me to thinking about I Know What You Did Last Summer.  And then that got me to thinking about what a terrible villain Benjamin Willis was.  And then THAT got me thinking about the 1986 horror/comedy Blood Hook, and how the killer in that movie is the real #1 ‘killer fisherman’ character of all time!  Well, the competition isn’t really steep – given there aren’t many killer fishermen in horror movies.  Pretty much just him and Benjamin.  But let’s take a peek at Blood Hook!

Sounds like George Takei might have been doing some voiceover work back then.  But anyway, that there was the original trailer for Blood Hook – and it was around this time that Troma picked it up for distribution.  Sadly and surprisingly, a lot of the gore was cut and therein lied most of the fun with this movie.

But, have no fear!  Vinegar Syndrome re-released it a few years ago in all of its original gory giant fishhook glory!  You can find a copy HERE or if you want to find a copy with the limited slipcover, then good luck hunting it down on eBay.  Give it a watch though – it will definitely have you ‘reeling’.  Ugh, that was bad.  My apologies.  It’s not like I’m on here ‘fishing’ for compliments for my bad humor and puns.  Ok, I’m done.

For those unaware, I’ve been a fan of Lloyd Kaufman and his Troma universe since day one, and I’m a proud Tromite!  So today on Sunday Bloody Sunday, I’m taking it back to when Troma became a household name in 1984 with the b-movie to end all b-movies…..The Toxic Avenger.

Let’s skip the foreplay and just get on with the kid on the bike getting his head run over by a car courtesy of bully Bozo and his cronies.  And if you haven’t seen this movie…..for shame!  Yeah, I’m talking to YOU.

Hey everyone!  If you’re looking to shed those extra pounds, one simple way to lose them is by having a weight machine crush your head in half.  If that sounds extreme, that’s because it is.  But you have to make sacrifices to get your body on track, right?  Welcome to this week’s Sunday Bloody Sunday where I’m highlighting one of the many great death scenes from Troma’s undisputed B-movie classic, The Toxic Avenger.

For all of you drug dealers out there who like to hang out in sweaty gyms, it’s probably best for you if The Toxic Avenger doesn’t go to your gym.  Why you ask?  Because there are so many creative and fun ways that he can kill you!  Maybe he could strangle you with a jump rope?  Bludgeon you with two barbells?  Or hold you down and jam part of a weight machine through your head until it splits in two.  We’ll go with that last one.  Btw – it’s very polite of Toxie to mop up his messes, don’t you think? 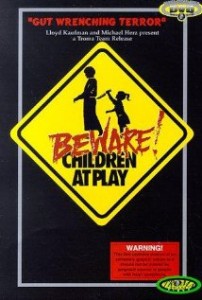 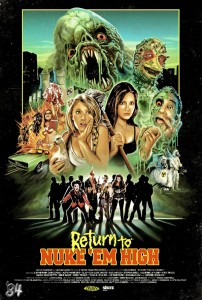 Take this with a grain of salt or a dash of pepper if you will, but it’s being reported by It’s On The Grid  that John Travolta is attached to star in the remake of Lloyd Kaufman’s 1984 B-Movie classic, The Toxic Avenger. Director Steve Pink (Hot Tub Time Machine) is scheduled to be behind the camera with Lloyd Kaufman contributing as producer and writer as well.  If true, this would be some of the most interesting movie news to “come out” in awhile. 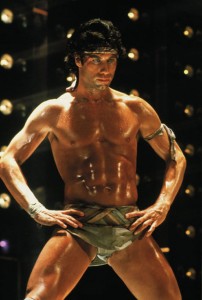 *look who’s been sweatin’ to the oldies!*

Now I for one would welcome John Travolta to Tromaville.  The burning question on everyone’s mind though would be:  who would he play in this toxic remake?  Would he be man enough to grab the big mop and portray our hero Toxie? Or possibly transform, accent and all, into stereotypical Irish cop, Officer O’Clancy?  Better yet….and this would be a stretch of course for more than one reason….but maybe Johnny Boy could be the leader of the street toughs who cause chaos and offer up hilarious dialogue in the restaurant scene.  There would be some pigment issues, but he could step into and try to fill the big army shoes of Frank.  I think he could “pull it off”! 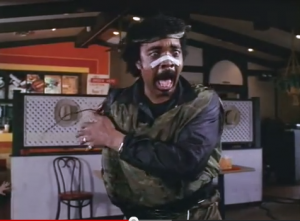 Let’s wait and see if this rumor/news gets verified before we start planning our Travolta Troma party.  In the meantime, go back and watch the original Toxic Avenger to see low budget/b-movie perfection at it’s finest.  Just don’t watch Part 2.  Seriously.  Don’t do it.  And while we’re at it – don’t watch Hairspray or you’ll be subjected to this:

*i will haunt your dreams*