So, everything was going along so nicely – the bad dubbing, Tony The Pimp (who hadn’t really had any golden lines up to this point), the blind guy who wouldn’t shut up…..Oh, but I wonder what’s going to happen after that girl put that mask on in the lobby and cut herself!?  Yep – here we go.

Spoiler alert for those who haven’t seen:  she goes to the bathroom because that pesky cut on her face is giving her some itchy issues.  Poor Rosemary (really?  Rosemary?).  The cut bubbles up and things aren’t looking so good. And then there’s a pop!  And then her hooker friend looks for her to see what’s taking so long – and there you go.  She turns around and that’s what did it for me. 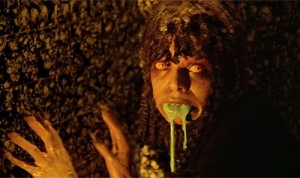 *a visit to the dentist is necessary i think*

This is all thanks in large part to the make up effects of Sergio Stivaletti.  It really set the tone for the bat shit crazy movie that would follow.  So fuck you Demons and Rosemary for traumatizing my childhood.  Now’s let’s all have a drink, crank up the soundtrack, and watch Tony The Pimp’s greatest hits!  Go Tony!