Ok.  Get prepared to grab your tar and feathers and think of other medieval ways to torture me.  I like Rob Zombie.  And yes, for the most part, I like Rob Zombie’s movies (ducks a flying rotten tomato).  Now upfront, I will say that I didn’t overly like his Halloween re-imaging, but thought it hit enough notes to justify it a decent unnecessary remake/reboot.  And the sequel had me for the opening 20 mins (love the hospital carnage), but then completely lost me and I became bored to the point where I was counting how many moles I had on my arm.  But let’s be real here – this wasn’t Rob Zombie’s lane.  Numerous studio interference issues hindered these Halloween flicks (not that it would have mattered that much honestly), and his real bread & butter was and always has been House Of 1000 Corpses and The Devil’s Rejects (Roger Ebert even loved the Fireflys).

*does this mask make my face look fat?*

Now the reason for this post though isn’t to talk about Zombie’s mediocre Halloween franchise, but to rejoice in the fact that he’s back at directing and writing an original story with The Lords Of Salem.

To sum up the plot quickly:  A radio station receives a mysterious wooden box containing a vinyl record.  The on air crew plays it and it plays backwards, then forwards and it becomes a huge hit and they give the group the name, The Lords Of Salem.  Another wooden box appears shorty after with free tickets, posters and records and urges the crew to host and promote a gig in honor of the new band.  Bad things happen, witchcraft is in play, and the original Lords Of Salem are returning and they’re out for blood. 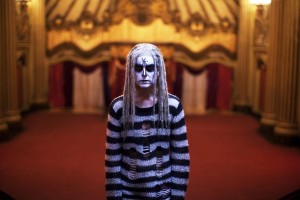 *the hamburglar called….he wants his shirt back*

The plot for Lords definitely has that 80’s horror vibe and brings to mind that rock/demonic guilty pleasure Trick Or Treat, starring Skippy from Family Ties. It’s said to have had a budget of only 1.5 million, so Rob is definitely going for the low budget, retro feel on more than one level.  And I have to commend him for that. Hopefully there will be no studio interference this time around, and we’ll get to see his full twisted vision the way he intends it.  On the flipside of that: if the film is a pile of shit, we know who to solely lay the blame on.  But like my dreams of becoming a professional hamburger eater, I’m going to remain optimistic.  The poster below is doing me some favors:

Now….let’s talk about the cast.  If there’s one thing I love about Rob Zombie and his cinema experiences, is that I’m constantly shouting out at the screen “hey, isn’t that (insert irrelevant actor name here)?!”.  He has a strong love for the genre and it always shows in his cast.  And I respect him for that, because he’s on a mission to make sure you don’t forget about these actors that once graced many dusty, straight to VHS covers.  Just check out this list of thespians in The Lords Of Salem:  Clint Howard, Maria Conchita Alonso, Meg Foster, Dee Wallace, Udo Kier, Lisa Marie, Sid Haig, Billy Drago, Michael Berryman, Christopher Knight (Peter Brady), Ken Foree, Richard Lynch (RIP), Barbara Crampton, and last but not least:  Ernest Thomas.  Yes, Roger from the hit show “What’s Happening!!” is in this movie.  That’s all you need to know. The Lords Of Salem will be premiering next month at the Toronto International Film Festival and will be released wide next year at some point. Stay tuned here for more info!  Oh – and notice that I didn’t include Sherri Moon Zombie in the acclaimed list of actors above?  Yeah…..some things are better off not spoken. 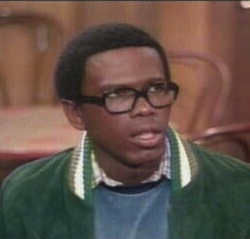 4 thoughts on “Anticipation Alert: Rob Zombie’s The Lords Of Salem”