Ok – what the hell was that?  Now granted, it’s just a trailer and maybe my now lowered expectations will turn out to be a blessing in human skin mask disguise when I see the finished product in theaters.  But I have to say, that looks like it has ‘straight to DVD stinker’ written all over it.

With the opening song (The Beast In Me – an updated attempt at the original made famous by Nick Lowe and Johnny Cash) setting the “tone”, the rest of the trailer pretty much follows the standard horror formula and that’s not necessarily a good thing.  Here are my Top 5  observations from watching the trailer:

2.  What’s the point of having this in 3D again?  Oh yeah – so the chainsaw can come right at your face….and maybe a pool stick or yo-yo too if you’re lucky….

4.  Why do they show Leatherface’s ‘face’ in the mirror while he’s getting ready to stitch his mask on?  Takes away from the creepiness and he just looks like a regular guy named Rusty down at your local mechanic shop.

5.  Oh wow – we’re finally going to get to see what we’ve always wanted: Leatherface at a carnival! 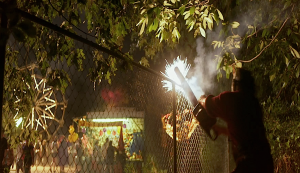 Yes I’m laying on the snarkyness pretty thick, but the only reason is because I hold the original Texas Chainsaw Massacre in such high regard that I really HATE when they bastardize a great horror franchise and iconic figure (looking at you NOES, Friday The 13th, Hellraiser, Halloween, etc, etc, etc…..).  Now as I’ve stated before, I dig the 2003 remake of TCM as well and applaud it for it’s grittiness and intensity.  It went balls to the wall and really pissed off Roger Ebert, which usually is a good thing in the horror world.  Texas Chainsaw 3D might prove me wrong, and I honestly hope it does, but the trailer left a lot to be desired and really brought me down off of my previous horror high.  Now quick!  Show a pic of a glistening, sweaty, frightened Jessica Biel from the TCM remake! 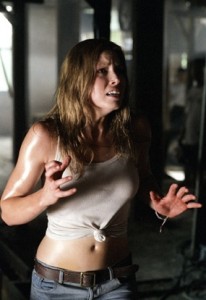 Ahhhhh……all is right in the horror world now.