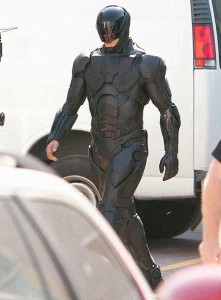 Ok then…..that’s a nice pic, but where the hell is Robocop?  Maybe he’s just still in his trailer getting ready, polishing up his bad ass suit, waiting to make a grand entrance and wow us all with his new updated look!  What’s that?  That is the new Robocop?! Hmmmm – ok.  Well, they get creative points for making him look more like Judge Dredd and nothing like Robocop.  My sarcasm runs thick through this post because obviously, no one got the memo that these remakes of our beloved 80’s classics needs to stop.  That Total Recall remake really worked out well for you guys, didn’t it?

The 1987 Paul Verhoeven original of Robocop was violent, gritty, touching, and violent again for good measure.  It was a huge part of my adolescence and I spent more than a few quarters on the kick-ass arcade game too. 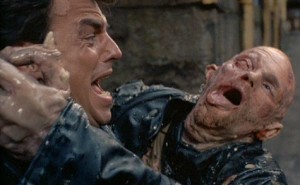 *i bet he’s got a great personality though*

But, there are two reasons to hold out some hope for this remake.  And those two reasons would be:  Gary Oldman and Michael Keaton.  Yes, both are signed on to play big roles in the flick, as well as Samuel Jackson and Jackie Earl Haley.  So the cast is strong, but as we all know, the story needs to be as well.  Not to mention that it needs to balance that fine line of paying homage to the original and bringing something new to the table at the same time.

First off:  it needs an R rating.  If we get that, then we’re moving in the right direction. Second:  limited CGI.  The original Robocop had a few effects clunkers, but it didn’t take away from the overall feel of it.  As usual, everyone is up in arms over one pic from a movie set and the prejudging before even seeing a teaser trailer has begun. Let’s all just take a deep breath, think positive thoughts, and go get some fried chicken because we all know that it’s Robocop’s favorite!

1 thought on “News: Would You Buy This For A Dollar? New Robocop Remake Pic!”