Yes, I shamefully admit that my first viewing of Sean Byrne’s Australian horror flick The Loved Ones was done by ways of the bootlegging variety.  I had heard such a strong buzz, that I couldn’t help myself as I watched a copy of the Australian DVD release online to see if it was indeed worthy of the aforementioned “buzz”.  And it was.  Luckily, it’s finally been released here in the US on DVD (not Blu-Ray yet unfortunately), so I was able to to sit down again with it, and this time in a more intimate setting (my wife lit candles and we sipped wine with our arms intertwined). 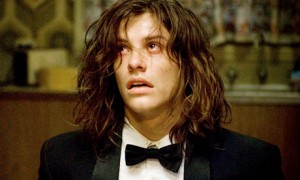 The Loved Ones was released in Australia waaaaaay back in 2009 and hit some of the US film festivals around that same time to rave reviews.

After being released on DVD in Australia that same year, us poor horror folk in the US couldn’t even get a theatrical release until recently in 2012 (a limited one at that) and then finally the previously noted DVD release was dropped in our lap.  Here’s the cliff notes version of the plot:  Boy loses father in car accident.  Boy develops a cutting habit and taste for metal music and a new girlfriend who likes sex in cars.  Creepy girl at school asks the boy to a dance and he denies her.  Creepy girl’s creepier father kidnaps the boy and ties him to a chair so his creepy daughter can have her own private “school dance” with a shiny pink dress and everything.  Power tools, hammers, nails, and incest are introduced and our boy must find a way to escape the chair and the house and stop this fucked up family for good. 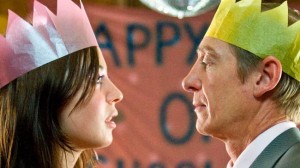 *is that a drill bit in your pocket or are you just trying to have sex with your daughter?*

The Loved Ones pretty much blew me away the first time I saw it and I think it blew me even harder the second time.  It’s shot beautifully and the colors really pop, which enhances everything, along with the soundtrack – specifically Lola’s theme song “Not Pretty Enough”.  Xavier Samuel (Brent) plays his tortured character well enough where you feel sympathy for him, even though he’s mute for most of the movie (having bleach injected into your voice box is a bitch).  And John Brumpton (Daddy) is as effective as a deranged/incestual character could be I guess.  But the real star here is clearly Robin McCleavy (Lola “Princess”) as she goes full crazy and ratchets it up a notch with each and every scene, until you almost slightly start to feel compassion for her in the end.  Psychotic perfection. 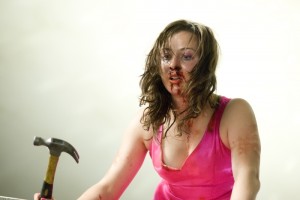 Obvious nods to Pretty In Pink and The People Under The Stairs are given, which honestly only makes me love this movie even more.  It’s refreshing when a filmmaker “gets it” and knows that what he’s giving his audience is something that they’re going to eat up and appreciate.  I possibly could have done without the side story of the goofy friend trying to score with the troubled goth girl, because they stretched that pretty far in the end to connect to what was going on with our batshit crazy father/daughter duo.  I think the story suffered when it cut back and forth between those storylines.  But overall, The Loved Ones was running on all cylinders for the most part when it came to the horror aspect and it gave us a few laughs to boot.  Definitely buy it here or stop by your local Redbox and rent it for a $1, and witness a new Psycho Queen be crowned!