Something’s in the water at the Chesapeake Bay.  Don’t worry, it’s just chicken shit.  But more on that later.  Acclaimed director Barry Levinson (The Natural, Diner, Rain Man) brings us his first horror experience in the form of The Bay. A found footage creature feature about a small Maryland town thrown into panic after a deadly plague is unleashed in the form of something toxic in the town’s water.  I guess I already kind of spoiled what that something is with the chicken shit reference above, but could there be more at play than just chicken shit?  A shady Mayor?  A government cover up??  Step inside and find out!

The Bay begins with our leading lady Donna Thompson (Kether Donohue) appearing on a webcam, about to tell us everything she knows about that fateful 4th Of July day when almost everyone in that small Maryland town became vomiting, parasitic hosting humans.  With everyone enjoying their barbecues, lighting off sparklers, and watching children splash in the pool – millions of fish are turning up dead in the water and the town Mayor is on the hot seat as to why it’s happening.  To make matters worse, various townsfolk start exhibiting strange symptoms of their own including, but not limited to: projectile vomiting, sores and lesions all over their bodies, and the occasional missing tongue. 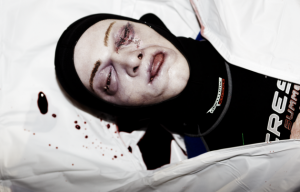 *still beautiful on the inside – that’s what matters*

In addition to Donna (who wears non-flattering high waisted pants and has a boy haircut), we switch back and forth to a couple and their baby on a boat as well as an oceanographer duo who are trying to figure out what exactly is going on by dissecting the dead fish.  Parasites and mutated isopods are found, and the bacterial outbreak back in town grows larger and much worse. Needing answers, the Mayor downplays the fact that contaminated chicken shit has gotten into the water system, and tries to come up with some other “reason” why everyone is being eaten from the inside out.  Obviously, The Bay is throwing some strong environmental jabs at the audience as there have been actual reports of chicken shit being dumped into the Chesapeake Bay. 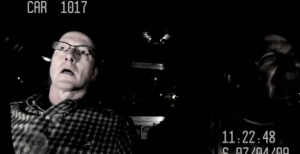 Starting with a fairly intriguing story, The Bay goes downhill towards the end and has trouble connecting all of the side stories in a cohesive way.  It’s a bit of a mess, but hidden within that mess are some pretty creepy images and sounds (the cop audio in the house and bloody face on the pier comes to mind) and a few jump scares that actually made me jump! (which is rare…) I’m pretty much over the found footage schtick, although here it didn’t really bother me too much and there was no shaky cam to be found, so no points lost there.

Where The Bay does lose points is in the acting department.  The character of Donna is the narrator throughout, and unfortunately, her voice sounds like a Kardashian.  It’s distracting and annoying and Levinson could have chosen a better actress for this role.  Highlight for me from her is when she asks if she still has blood on her face. And it’s still completely covered in it :-/  My other acting highlight would be when a Homeland agent actually says the phrase “deep doo-doo”. 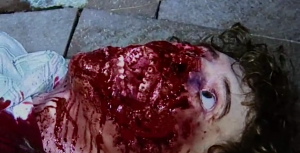 *any volunteers to give mouth to mouth?*

I give Barry Levinson credit for trying to do something out of his “comfort” zone with The Bay.  I just wish he would have executed better because I feel that underneath all of the plot lines and bad acting, is an intriguing little creepy horror movie waiting to be let out.  I wouldn’t say that this found footage feature is a complete waste of time though.  It gave me some genuine creepy moments and visuals and true jump scares are always a plus in my book for a horror movie. If you’re curious and want to jump in this water yourself, check out The Bay on VOD now.  Just make sure to have that life jacket ready in case you want to get out.