It’s time once again for one of my favorite features titled You Ain’t A Killer, where I give you my thoughts on that big killer “reveal” from your favorite slasher movie or one that you’ve never even heard of.  Going with the latter this time, I bring you the 2009 straight to DVD stinker, Cornered!  No I wasn’t excited when I just typed that sentence, the title for the movie actually has an exclamation mark attached to it.  Now if you don’t want me to ruin this gem of a movie for you, then please stop reading now.  Because this is where I tell you who the killer is and why it just rubs me the wrong way.  So without anymore hesitation, I’m hear to proclaim:  You ain’t a killer Steve Guttenberg!  Wait.  Did I just type the name Steve Guttenberg?  No Shit?

*memories…..light the corners of my mind*

So yeah.  Steve Guttenberg is a psychopath in this movie.  Let that sink in for a minute, especially my fellow 30-40 year olds who grew up an his cinematic antics.  Now let’s delve deeper into the Guttenberg madness, shall we?

A quick rundown of the plot from Cornered! goes something like this:  In numerous Los Angeles convenience stores, a serial killer is slaughtering employees.  He steals the surveillance tapes of the murders and the police offer a handsome reward of $500,000 for his identity or capture.  Meanwhile in a random convenience store downtown, the owner Steve and his band of classy employees (a phone sex operator, a whore, and a junkie) play a game of poker and discuss how they would kill the psychopath if they were to find him.  Enter in Morty (Guttenberg), the beer delivery man, who voices his concern for the murders and collects some valuable information along the way for good measure.

Now because I’ve already ruined the big “reveal” for you, I’m sure you can piece together what happens next.  Morty the beer guy uses the employee’s “scenarios” against them, disposing of them however they described they would dispose of the killer. He also wears a nifty S&M zipper face mask to enhance his appearance.  Now I’m sure it all sounds like a good ol’ time in Slasherland for some of you, but I just couldn’t get past the fact that it was Mahoney from Police Academy torturing all of these very deserving brats. 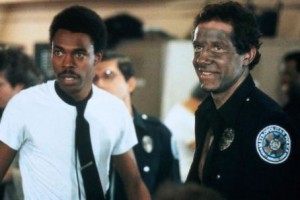 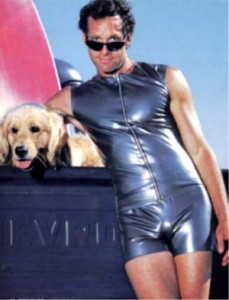 I guess the bottom line because it’s the name of the post, is that Steve Guttenberg ain’t a killer.  A lovable, typecast, 80’s and early 90’s actor yes.  But a killer?  No. As much as I loved to see Steve trying something new and bleaching his hair badly in Cornered!, it just didn’t fit him or his character and was more laughable than scary.  Speaking of laughable, who blocks a door with empty cardboard boxes?  (A joke for the few who have actually seen Cornered!)

So here’s to you Steve Guttenberg, but not for your role in Cornered! unfortunately.  Morty the beer delivery psychopath killer you are not.  A middle aged man who raises a baby with Ted Danson and Tom Selleck you are.  Stick with that. 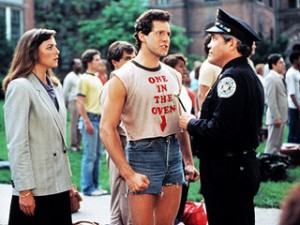 *you wouldn’t hit a pregnant man, now would you?*