It’s no secret if you really know me or have been stalking me, that the 2007 French horror movie Inside will forever remain on my list of movies that I would recommend to anyone with a cinematic pulse.  The brutality, but equal beautifulness of it all will definitely be embedded in your head after one viewing (although you may not be able to watch it again after that).  So it came with much joy and happy dancing when I heard that the directors of Inside, Alexandre Bustillo and Julien Maury, were back behind the camera with their new movie Livid (or Livide in French).  It was pretty much a given that the imagery would be there, but would the story grab a hold of me like their previous effort?  Step inside and find out…..

I really had no previous knowledge of this movie other than the fact that it took place mostly in a house.  No trailers had been released, and only a few production stills gave a glimpse of what the film was about.  The story opens with a young girl named Lucie who is beginning her training as an in-house caregiver with her “teacher”, Mrs. Wilson.  Lucie is timid, but also ambitious at the same time, and we get a flashback that tells the audience about her mother’s recent suicide which explains her switching demeanor.  Lucie and Mrs. Wilson end up at a creepy old mansion owned by the bedridden Deborah Jessel, and Lucie learns some juicy nuggets of info while she’s there, such as: Mrs. Jessel was a prominent ballet teacher, she had a deaf daughter, and there is believed to be a treasure of gold and jewels hidden somewhere on the property.

After meeting with her two friends and telling them about the mysterious treasure, they convince Lucie to go along with them to search for it.  In the meantime, we see that Mrs. Wilson may not be the innocent caretaker that she seems to be.  As our three friends search the Jessel mansion, they discover that they may have gotten more than the bargained for after uncovering a creepy dancing ballerina corpse and also discovering that Mrs. Jessel was no longer in fact bedridden.  Uh oh SpaghettiOs!

From here on out, the story takes a pretty sharp turn and it caught me off guard a little.  Again, I really had no previous knowledge of what Livid was about beforehand, so it kind of sucker punched me a few times, which I don’t have a problem with at all.  I noticed some influence from Guillermo del Toro as the horror became combined with fantasy from time to time, which kept me on my toes.  Not knowing what was going to come next really had me digging it even more.  A little too complicated for it’s own good towards the end, it tried desperately to connect all of the dots and for the most part, succeeded.  This is definitely a movie that benefits from the whole “the less you know, the better” theory. 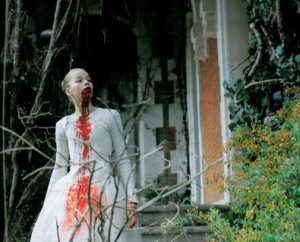 *you have a bit of a drooling problem there dear*

Livid was a mesmerizing feast for the eyes, as well as the ears, thanks in part to the effective sound design.  Even though I mentioned the fantasy aspect earlier, horror is front and center and there are more than enough spooky and unsettling scenes for you to get your fix from.  There’s a lot of scary stuff going on here and it had me twitching in my chair more than once.  Have to also commend the filmmakers for giving some fun nods to An American Werewolf In London and surprisingly, Halloween III: Season Of The Witch. The acting is pretty strong throughout, especially from Chloe Coulloud (Lucie), and the set designs were as unnerving as they were amazing.  Not exactly coming close to their previous masterpiece, Inside, Bustillo and Maury still manage to give the viewer something special here.  Bummer is that it’s not out on DVD in the US yet, do yourself a big favor and track down Livid if you can.  You can thank me later. 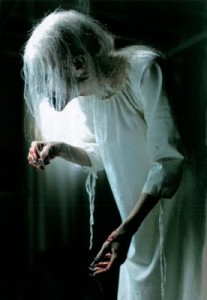