So there I am, flipping through the channels on a late Saturday night and I couldn’t help but to relive a little childhood nostalgia and stop on Wes Craven’s 1989 laughable body switching flick, Shocker.  And as I half-sleepily watched Horace Pinker mug it up for the camera and limp around the screen with his bad leg, I kept being startled by the music.  No, I’m not talking about the mildly awesome Megadeth cover of Alice Cooper’s “No More Mr. Nice Guy”, but about composer William Goldstein’s score that plays throughout.  Annoying would be a kind word to describe it, as it continuously sounds like someone is stumbling and falling all over a piano for each music sting to highlight something “scary” or “disturbing” that’s happening.  And it’s not just once or twice.  It happens a lot. 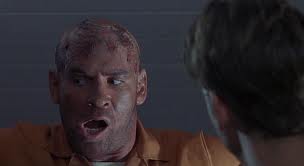 Now, I like Shocker overall for the cheesy awfulness that it is.  But the music has me reaching for my mute button.

And I wondered how I could get you, the average reader, to understand the musical pain I go through every time I watch this movie.  So, whenever you see the word (SHOCKER!) from now on in the post, you must click on the link to get a sense of how annoying these music stings actually are in the movie.  And then just click back to continue reading my ridiculousness.  It’s my first interactive post!  Hooray!  Ok, ready?  Here we go.

This movie has John Tesh in it!  Not sure why that’s relevant to the post, but figured I’d get it in there.  So, one of the things that I do like about this movie (SHOCKER!) is the character of Horace Pinker (Mitch Pileggi).  He’s menacing and brutal and somehow he has the savviness (SHOCKER!) to rig up the electricity from the TV in his jail cell to his hands and get all of those candles without any guards noticing. Another thing I liked (SHOCKER!) is that there was (SHOCKER!) a character named Rhino.  I think if we had just had a straight serial killer (SHOCKER!) movie with Horace Pinker not (SHOCKER!) hobbling around switching bodies, it would have been more effective and enjoyable (SHOCKER!).  Ok – annoyed yet?  Now picture that through an hour and a half of runtime. 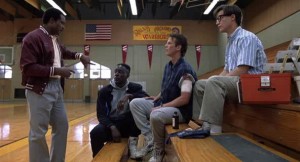 *ok – you guys be shirts and we’ll be skins*

Possibly if the score had been more minimal and not so “in your face”, I wouldn’t be writing this post right now.  But I am.  And you’ve suffered with me as you clicked that link every time you were instructed to.  And I guarantee you that the next time (if there ever is an actual next time) you watch Shocker, you’ll notice the music even more and most likely throw your remote at the TV or get up and eat a cold slice of pizza while you stuff your ears with cotton.  So thank you William Goldstein, for one the most annoying and horror-ble music scores ever recorded on film.  At least we made it through this post without having to click on one of those (SHOCKER!)………..dammit. 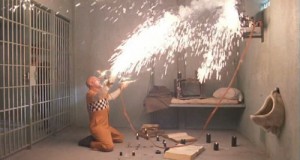