Last year, I was lucky enough to purchase quite possibly the best horror T-shirt ever from Fright Rags that meshed two of my favorite childhood memories together as one.  And those memories would be G.I. Joe and Friday The 13th.  Yep, Fright Rags released a limited edition G.I. Jason T-shirt and I made sure to snag one up!  But what I didn’t intend to snag up in addition, was this mock cardboard packaging that they sent out for a real G.I. Jason action figure:

The detail is amazing and it even comes with a Clearance $4.00 sticker on the top right corner!  Not to mention the fact that it actually looks like the figure was ripped out of the package.  So it really got me to thinking of how cool it would have been to have an actual army of Jasons to battle against Joe and his team, or maybe even team up and take on the evil genius of Cobra Command instead!  And if you flip the cardboard package over, you’ll see some of the other Jason characters that you could use to plan your attack: 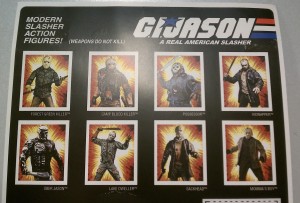 I think Sackhead probably would have torn some shit up.  If they can make some horrible Django Unchained action figures, then why not get in the lab and crank out some of these G.I. Jason bad boys?  Kudos to you Fright Rags for stepping up your game and giving every kid who grew up in the 80’s something to hope for when they’re in their 30’s and 40’s.  Yo G.I. Jason!