Ave Mariiiiiiiiiiiiiiiiia……trust me, I sing much better in written form than I do in vocal form.  Your ears will thank me later.  Anyway, as in the actual movie, it felt right to start off my review with that song.  And the movie I’m talking about of course is the new sick and twisted, but rather artistic, American Mary. Directed by The Soska Sisters (and twins at that), this is a cautionary tale of a movement that is all the rage nowadays:  body modification.  So let’s throw American Mary up on the operating table, cut her open, and see what we have to work with, shall we?

All that Mary Mason (Katharine Isabelle) wants to be is a surgeon.  So she practices surgery on a turkey at home, goes to a night school that is taught by a professor with a potty mouth (‘useless twats’ probably being his best line), and struggles to make her student loan payments all at the same time. Desperate for money, she turns to a Craigslist type site and finds an ad that promises fast cash, without having sex with anyone (what a deal!).  And it’s from that ad that she meets Billy (Antonio Cupo), a sleazy dude who runs a strip club/massage parlor/shady business and in a pinch, needs Mary’s amateur surgical skills.  He offers her $5000 on the spot to fix up a friend of his, to which she does, but immediately gets sick at the thought of what she just did.  But the money will take care of her student loan troubles, so it all works out in the end, right? 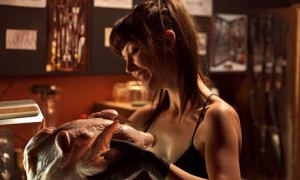 *i’d be proud of that delicious turkey too*

Not so fast.  Mary first gets a strange call, then an impromptu visit from Beatress (Tristan Risk), a girl who is obsessed with Betty Boop, both in the looks and voice.  Beatress has heard of Mary’s “skills” and is seeking her assistance in helping her friend Ruby (Paula Lindberg) achieve her lifelong dream of becoming an actual living doll.  For those playing at home, that means she wants her nipples and vagina sewn up.  Yep, shit just got more weird.  Mary agrees, gets a handsome reward, and immediately is thrust into the surgical spotlight for the work that she’s done on Ruby.  High off of her positive reviews, Mary attends an exclusive surgeons party, thrown by her foul mouthed professor, Dr. Grant, and and it’s at this point in the movie where things take a nasty turn. 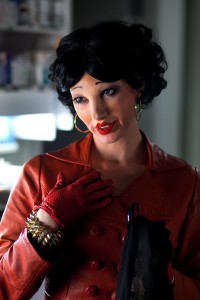 *have you had work done?*

Something happens to Mary, and it’s here where she decides to use her “skills” to exact revenge on the perpetrator and enlists our sleazy club owner, Billy, to help.  After that, her business is booming and the money keeps growing, as does Mary’s confidence.  For the remainder of the movie, we watch her carefully try to balance her life between right and wrong, as she fully realizes that she has indeed become a underground surgical celebrity.  Will Mary continue to make a name for herself and flourish, or will her past catch up to her and derail her red gravy train?  Speaking of the red stuff, it’s pretty abundant here, and there will definitely be a scene or two that will have you squirming a little.

Let’s talk about the acting.  Besides our Betty Boop lookalike, the star of the show is Katharine Isabelle.  The only problem I had with her though, besides some dodgy acting here and there, lies in the character of Mary Mason.  There were times when I wanted to root for her, and other times where I couldn’t give two shits.  You feel the pain she’s going through and want to have empathy, and then other times, you just don’t have anything invested in her character at all. It’s a slippery slope, but the bottom line is that in the end, she does something with Mary that very few actresses probably could.  And it’s because of her performance that I’m inclined to give a favorable review – without it, we’re bordering on two star territory here.

Besides Ms. Isabelle, what makes American Mary work is the Soska Sisters. I’m talking the directing here, not their acting.  Still not sure if those accents of theirs were intentionally that bad or what.  I dug their directing style though and more specifically, their use of lighting in the film.  It can really make or break a scene, especially when trekking into the horror territory, and they succeeded here. The music was also on point throughout, with the most memorable for me happening during Ruby’s surgery procedure.  My main complaint besides some of the iffy acting, was the ending. I get what they were going for and they had to find some way to tie everything together, but it felt a little forced and didn’t really have that emotional “punch” that I was hoping for.

American Mary overall was like a Nip/Tuck episode on steroids, and I mean that in a good way of course.  The Soska Sisters are definitely a directing duo to keep your eye on (just don’t let them speak in accents) as this was only their second directorial feature (Dead Hooker In A Trunk being their first).  I have high horror hopes for them in the future!  And Katharine Isabelle made it known to me that her acting chops in Ginger Snaps weren’t a fluke, as she gave life to Mary Mason and the movie just wouldn’t have been the same without her.  With more consistent acting and a tighter script/ending, American Mary would be bordering on definite cult phenomenon status.  As it stands though, it’s an ambitious and entertaining flick, sprinkled with a little horror, and it easily gets my support and approval!