Stop me if you’ve heard this one before:  a sex and alcohol obsessed clown attends a children’s birthday party and proceeds to fall on a large kitchen knife because the kids harass him and tie his shoelaces together.  Then he is summoned from the dead to get his revenge six years later, thanks in part to a legendary ritual performed by his clown peers centered around an egg that looks like him.  If you got excited from reading that, you’re weird, but it also means that you’re on board with a new horror/comedy called Stitches and I’m about to give a review of it!

Originally released in 2012, Stitches is a low budget import from Britain/Ireland and stars upcoming comic, Ross Noble, as our demented murderous clown.  Hailed by one of my favorite sites, Bloody-Digusting, as an instant cult classic, I couldn’t wait to check it out for myself and see if it would live up to the hype.  I’m always down for a good horror comedy, unless it’s called Piranha 3DD, and throw some clowns in the mix and I’m extra down! I’d slow down a little on all of that ‘instant cult classic’ talk though.  Let’s knock the plot out of the way for beginners, shall we?

Nothing too complicated here and I’ve already alluded to the basic premise in my intro, but the story centers around a degenerate clown named Stitches (Ross Noble) who is teased and accidentally killed at a children’s birthday party.  The kid who’s party it was, Tom (Tommy Knight), is distraught and happens upon a ritual involving a pack of clowns that proceed to attempt a resurrection of the deceased Stitches, and it all revolves around an egg that looks like him.  Flash forward six years later and Tom is all growns up, but is still traumatized from what he saw and has constant creepy clown visions now. His friends are determined to turn his frown upside down though and decide throw him a super fun birthday party!  Only problem is that Stitches is going to be crashing it. 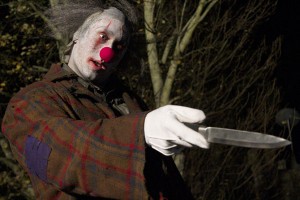 *he really is the knife of the party*

Good horror comedies are hard to pull off.  Shaun Of The Dead being the obvious exception.  That movie has the trifecta, plus one:  acting, story, directing, and gore.  Quite the feat.  Unfortunately for Stitches, it really only has a decent story and some great gore gags going for it.  Now I don’t expect to be rolling around on the floor with a standard horror comedy, but it really felt like they missed the mark here with some of the jokes.  And the best jokes are done at the expense of the elaborate and inventive death scenes at that.  Ross Noble does a decent job with the Stitches character, but a lot of what comes out of his mouth falls flat, tempting me to hit the fast forward button.  I stuck with it though and refrained, and did enjoy all of the low-budgetness for what it was.  It reminded me of a time when movies like Dr. Giggles were around. Bad puns, bad acting, ok plot, but somehow…..enjoyable?  That’s what Stitches is in a nutshell. 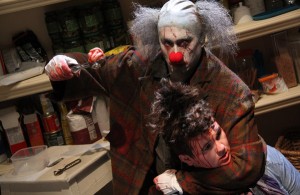 Let’s talk about the big bright spot here.  The kills and the gore.  They’re over the top, bloody as hell, and fairly disgusting, even for a seasoned gore veteran like me.  And bonus points for being creative too.  Going the practical route with a little CGI thrown in, we get:  brain scooping, an exaggerated umbrella kill, a bunny pulled out of a throat, some intestine balloon animals, and more! They really go for it here and it’s worth the price of admission alone. Accompanying the kills are the standard bad puns of course.  Such as when Stitches kicks a teen’s head off with his big clown shoe, he remarks afterwards to another teen “Sorry, he’s not around.  He had to ‘head’ off“.  Not exactly Shakespeare, but it does the job.  If the jokes and dialogue were snappier and funnier, we could have really had that instant cult classic that Bloody-Disgusting was talking about. 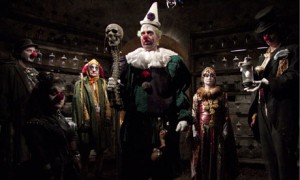 Now you know that director Conor McMahon was definitely going the more comedic route when outtakes appear during the credits at the end of the film. Not that I had a big problem with that, but I almost wish that Stitches had been a more straight laced horror flick, with just a little comedy thrown in.  Also could have done without the sappy, forced love story between Tom and Blowjob Kate (great name btw), because it’s been done over and over again. I’ll quit nitpicking though and definitively say that Stitches is well worth a watch if you’re into low budget horror movies.  Think of it as Killer Klowns From Outer Space on steroids.  I applaud the overall “balls to the wall” approach they took with the kill scenes and there was something about the covenant of clowns scenario that hit the mark with me too.  In addition, I did learn from this movie that if I ever do encounter a resurrected clown, all I need to do is squirt some dish soap in his face to back him off.  Crude, dumb, gross, enjoyable?  Yes. Instant cult classic?  Don’t be a Bozo. 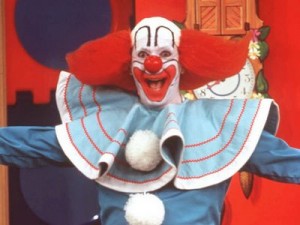 *who the f*ck did my eyebrows?*