I’ll admit, when I heard that Elijah Wood was going to be strapping on Joe Spinell’s boots in the Maniac remake, to say I was skeptical would have been an understatement.  Let’s be real here, most associate Wood with the Lord Of The Rings Trilogy as Frodo Baggins, so to picture him scalping hapless female victims and becoming a creepy stalker would have most scratching their heads.  I’ve always thought he was a talented actor, but this was dark territory he was entering here and for this remake to work, he would have to convince us that he was indeed that “maniac” with Mommy issues who had a fascination with bloody scalps and mannequins.  Good news folks – he convinced us.

Let’s go back to 1980 for a minute when director William Lustig (Maniac Cop) would give the horror audience Maniac, a film that some consider to be a trail blazer for the slasher genre.  Joe Spinell (who wrote the original by the way) took on the role of Franck Zito and played it as methodically as he could, because in the end, you honestly felt that he was a maniac.  He was creepy, gross, and portrayed that “guy you have to constantly look over your shoulder for” perfectly.  Enter now into the present day remake directed by Frank Khalfoun (P2) and written and produced by now horror vet, Alexandre Aja. Maniac is one movie that I didn’t mind hearing was going to be thrown on the remake train.  And with Alexandre Aja involved, I felt even better considering his The Hills Have Eyes remake is somewhere near the top of the pyramid as far as the horror remakes go in my opinion.  Casting Elijah Wood in the lead was my only concern, but as I mentioned earlier, he brought his ‘A’ game and the fact that he even took on this role is a brilliant move on his part considering it’s so far left of anything he’s ever done before. 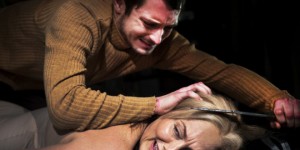 The plot, albeit fucked up, is pretty simple.  Frank (Elijah Wood) is a loner who owns a mannequin shop and likes to scalp and kill unsuspecting women all while having hallucinations and constantly obsessing over his dead mother who was a whore.  See, told you it was simple!  There is more though.  A photographer named Anna (Nora Arnezeder) is quite taken by Frank’s mannequins and offers to shoot some photos of them for an exhibit that she has coming up.  Immediately, he is drawn to her and has no intention of detaching her scalp.  That is until he finds out she has a boyfriend.  Duh duh duhhhh….. 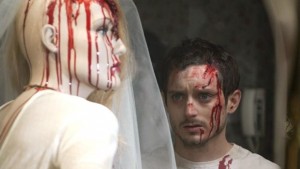 Stylistically, it doesn’t get much better than Maniac.  Make no mistake about it – this is an art house horror movie.  It’s told almost entirely through the perspective of Frank, giving a POV feel which makes it creepier.  It’s extremely effective, if not uncomfortable at times.  Throw in the Los Angeles setting and it just completes the overall feel that it was going for.  But wait!  Can I talk about the music?  Music can make or a break a movie for me, and what’s on display here in audio form is pretty amazing.  Not only is the original synth score by Rob (no last name) perfect, there are also great usages of Ave Maria and Q Lazzarus’ “Goodbye Horses” (best use of it since Silence Of The Lambs). The whole vibe of the movie is so spot-on, immediate repeat viewings are a must. 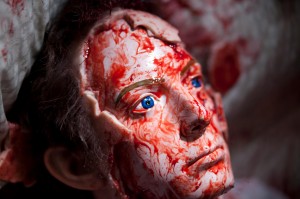 To touch on the acting again, Elijah Wood is the star here and he convinced me that he wasn’t just good for hobbit hijinks.  Not sure that I believed him to be a true maniac as much as Joe Spinell in the original, but overall he wore the boots well.  Nora Arnezeder played the sympathetic/unknowing woman well, although her accent was distracting at times – nothing that I couldn’t handle though.  Megan Duffy, who plays Lucie (one of Frank’s stalkees), was centered in one of my personal favorite scenes and not only played the best victim, but she sure can sell a hand choking like nobody’s business. 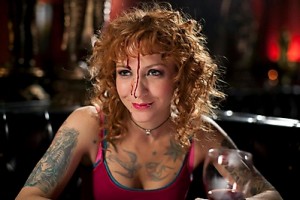 What we have here ladies and gentlemen is something rare.  No, not a unicorn.  I’m talking about a horror remake that actually works!  Maniac had me hooked from the opening scene and title card (which are both eye-popping) and never let up during it’s short but sweet runtime.  It’s not for everyone, especially if you haven’t seen the 1980 original version.  If you have seen it though, you know what you’re in for.  If you haven’t, get ready for lots of uncomfortable nudity, vicious violence and gore, and a lot of moments that will make you feel wrong and icky for even watching what’s on the screen.  That’s the beauty of it though, and what’s on the screen is actually beautiful in it’s own sick way.  Anyone involved in a future horror remake take note:  watch Maniac.  That’s a short note, but yeah, just watch Maniac.