Raise your hand if you hate Nazis.  Raise your other hand if you hate mad scientist Nazis who try to develop an army of unstoppable monster creations to win World War II for the Germans.  Now keep your hands in the air and wave them like you just don’t care.  Done?  Ok, good.  Welcome to Frankenstein’s Army.  A movie set during World War II that tells the story of a Russian battalion who track a radio signal to a location where they believe some of there fallen comrades may be.  But oops, it’s turns out it’s the lair of Viktor Frankenstein, and he’s been busy building monsters in his spare time for Adolf Hitler.  How sweet.

Being that I’ve already given most of the premise away for Frankenstein’s Army in the intro, I won’t spend too much more time on it.  The plot itself is a bit ridiculous, but when you’re dealing with massive monsters that have machete hands and chest propellers, who gives a shit about a plot, right?  Yes, the set pieces and the monsters are the highlight here, as well as Karel Roden strapping on the boots of Dr. Frankenstein.  Roden is one of those actors that you can always count on, especially when he’s playing the bad guy (loved him in Hellboy).

Think of Frankenstein’s Army as a big ass haunted house experience.  It’s shot mostly through the first person POV, and does suffer from time to time of the dreaded “shaky cam” syndrome.  I didn’t have that bad of a time with it though and director Richard Raaphorst makes the most of the settings he has, bringing them to the forefront.  It’s definitely a movie that’s pleasing to the eyes even though it does get a bit too dark at times, which hinders the overall experience.  I dug the minimal score and loved the sound design, especially when it came to the monsters.  Lots of clanging and scraping going on, and the ever effective air raid siren is thrown in a couple of times, which is always a plus in my book.

*it’s just a flesh a wound*

As I said earlier, the monsters are the main stars here (sorry Karel Roden), which is why it’s a little disappointing that they’re so hard to see at times, and don’t get the shine that they deserve to get.  Not a lot of CGI going on which means Frankenstein’s Army goes the practical route, making me happy and sad at the same time because of the underdevelopment of the monsters. These bad boys should be on full display here for all to see, and the shaky cam novelty ruins that most of the time.  Still was impressed though overall with their look, and I was digging each individual one for the most part.  It kind of reminded me of the first time that I saw Clive Barker’s Nightbreed where each time a different monster popped up onscreen, my inner horror child started grinning. 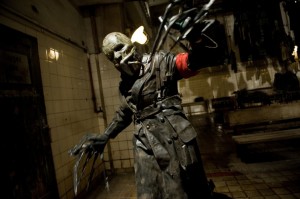 So, is Frankenstein’s Army worth your time?  I would say yes.  Far from perfect, but at under 90 minutes, it moves along fast and gives you enough visually to hit the spot.  The script was pretty generic, but the acting was above average and as usual, Karel Roden plays the bad guy well.  More than enough monsters and gore to keep the average horror fan happy and thank god they didn’t incorporate any of that Dubstep music that they had in the trailer for the movie. Pretty much a giant haunted house come to life, Frankenstein’s Army gets the Dirty Horror seal of approval.  But the Nazis?  Not so much.