Isn’t it nice to have a friend till the end?  Someone who will stick by you. Someone who you can tell your deepest, darkest secrets too.  And someone who will gut you like a fish if they get the chance.  This just took a dark turn, huh?  And we all know who the most famous friend till the end is, especially in horror history.  Chucky!  Yes, Chucky…..the little red-headed Good Guy doll who is inhabited by serial killer Charles Lee Ray and needs to soul swap with little kids to keep his doll body going.  And Chucky’s back in Curse Of Chucky, this time going straight to DVD and losing all of the Three Stooges comedy routines that surrounded the last couple of sequels (Bride Of Chucky, Seed Of Chucky).  Question is:  would that be a good thing, or a bad thing?  Read on to find out…..

I’ll start this off by saying that I never really loved the Child’s Play franchise. Didn’t hate it, but overall there was just too much novelty involved with it for me.  I dug the first one and honestly thought that the sequel (Child’s Play 2) was better.  Then it got into ridiculous territory with the next three.  I’ll admit that I chuckled at Chucky a few times and dug the over the top gore in the latter efforts, but the bit got stale and old pretty quick.  Which is why I was actually excited to hear that writer/director Don Mancini was returning to Child’s Play’s horror roots with this new outing and I’m happy to report that in my eyes, it’s a success. 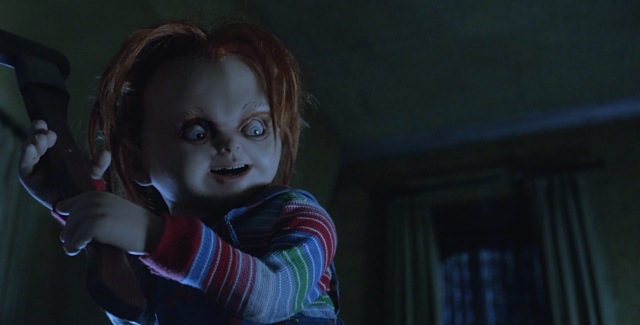 Curse Of Chucky opens with a mother and her wheelchair bound daughter Nica (Fiona Dourif) receiving a package at their doorstep.  Hey, guess what? The package is Chucky!  And of course Nica’s mother decides throw the creepy doll in the garbage and of course Nica’s mother soon ends up dead by what appears to be a ‘self inflicted’ knife wound.  With the funeral planning going on, Nica’s older sister Barb arrives with her husband Ian, daughter Alice, and nanny Jill.  There’s obvious animosity between the two sisters as the whole family along with a counseling priest sit down for a delicious vegetarian family dinner.  Always the jokester though, Chucky pours rat poison into one of the dishes and what follows is a nice little ‘who’s gonna die’ moment and ends up having a pretty satisfying payoff. 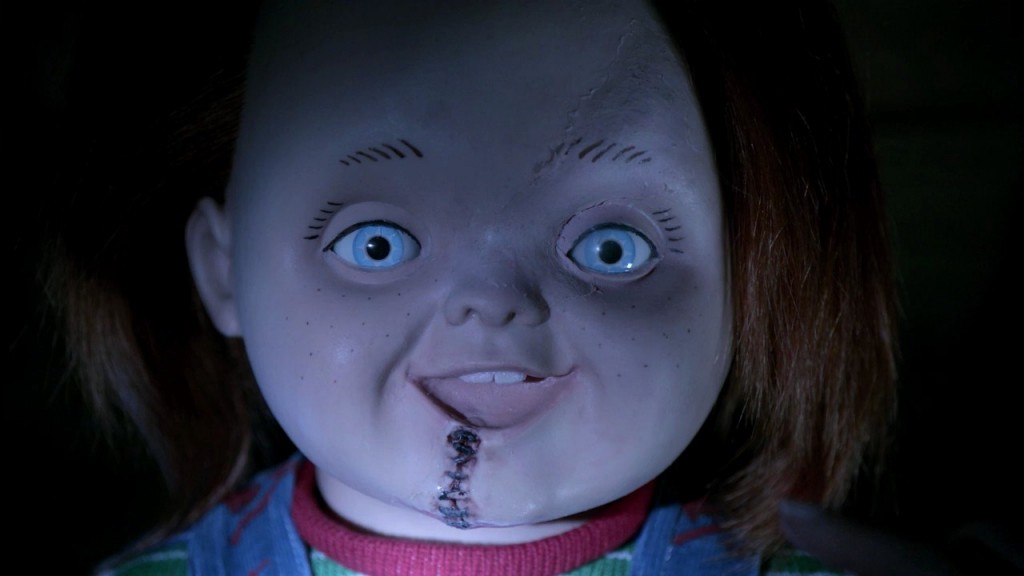 But the problem with the first half of the movie is that it’s just too slow.  I’m all for build-up in movies, but a movie like Curse Of Chucky doesn’t really need it.  It’s not until about 50 minutes in that we really get our full dose of the Chuckster, snarky puns included.  After the dinner table fiasco, it really delves into ho-hum territory, but still maintaining it’s dark atmosphere which is why I think I stuck on board.  We get a bit of a backstory on Charles Lee Ray as the family notices him in some old family movies which prompts Nica to do a little investigating soon after only to discover who Chucky really is.

It’s when Chucky finally shows his true colors and voice (voiced again brilliantly by Brad Dourif) that Curse Of Chucky hits it’s stride.  And it has a few tricks up it’s sleeze too to make that final 40 minutes all the more enjoyable.  You can tell that Don Mancini really was trying to tie all of the Child’s Play movies into one because we end up getting a little bit of everything, including some really nice cameos.  I won’t ruin those, but be warned that a lot of sites are ruining it and it honestly will take the fun out of your viewing if you know too much.  And stick around after the credits for what very well could be the bloody bow put on top of the Child’s Play franchise for good. 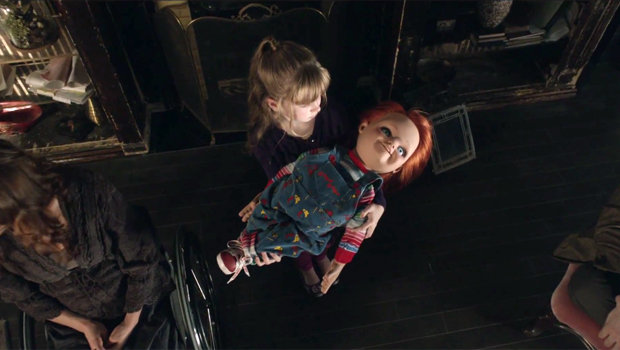 *Who taught you how to hold a doll?*

Now look – even with all of the dark atmosphere you can throw at me, it’s still hard for me to be scared of Chucky.  But having said that, I have to say that I really liked Curse Of Chucky.  It won me over in the end, and had it not been for those final 40 minutes and all of the nice little surprises, this review probably wouldn’t be as favorable.  But alas, it is and I would tip my hat if I wore hats to Don Mancini for pumping some life back into the Child’s Play franchise.  A bit of a shame that it ends up being one of the better movies from the series and it goes straight to DVD.  So is the way of the horror movie world sometimes, but that shouldn’t stop you from seeking this one out and giving it a watch.  And maybe, just maybe, we haven’t seen the last of our little ginger-haired Good Guy.  Hidey-ho!