Word to the wise if you want to take your girlfriend of two weeks for a romantic getaway to a secluded hotel in the woods:  Check the reviews on Trip Advisor first.  Just saying, because you might get lost and have some psycho playing head games and stalking you if you don’t.  Welcome to Jeremy Lovering’s tense little independent shocker, In Fear.

I’ll admit – I didn’t really know much about this movie other than the fact that it had a very high rating on Rotten Tomatoes.  So needless to say, I was intrigued just from that.  Then I watched the trailer and had to stop watching after 20 seconds or so because I didn’t want to see too much.  I was already hooked.  So I sat down with the movie and was pretty impressed.  But then, I just read a note about In Fear that said the director Jeremy Lovering worked off of no script and had his two main actors mostly improvise their lines.  What?!  They had no idea what they would be confronting, which honestly blows my mind and makes me want to watch the movie again. 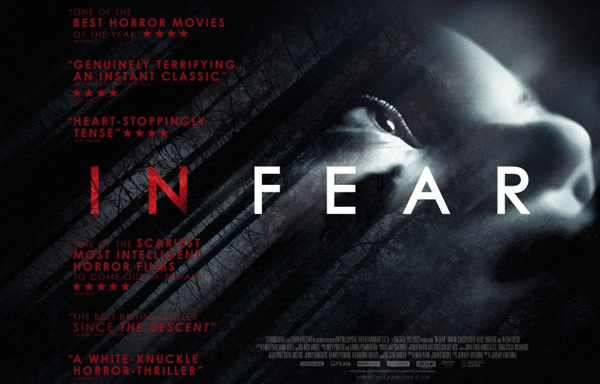 Let’s talk plot real quick.  Lucy (Alice Englert) and Tom (Iain De Caestecker) are a 2-week old couple off to a music festival in Ireland.  After stopping at a pub along the way in which an altercation takes place between Tom and some locals, he reveals his plans for shacking up at a remote hotel in the woods.  Lucy is timid at first, but gives in to Tom’s charming ways.  Darkness sets in, the couple gets lost, and that’s when things get a little hairy as they pick up a third party in the middle of the road.  Is he in on it?  Is Tom?  Maybe Lucy?  Are they being followed by werewolves?  Ok – no werewolves, but something’s going on!

In Fear has a short 85 minute runtime and that works in it’s favor.  Had it been any longer, and we definitely would have had some problems.  The actors all do a great job (especially knowing now that they improvised), but the real star is the atmosphere and Lovering’s directing skills.  Being able to squeeze every ounce of tension out of a scene is not an easy feat, but it’s accomplished near flawlessly here.  Sure the characters sometimes make stupid decisions, but don’t they always in horror movies?  In Fear doesn’t exactly reinvent the wheel when it comes to the genre, but it does leave you on the edge of your seat and has you playing the ‘guessing game’, which is always a plus.  Not to mention that it has a siphoning hose death scene. 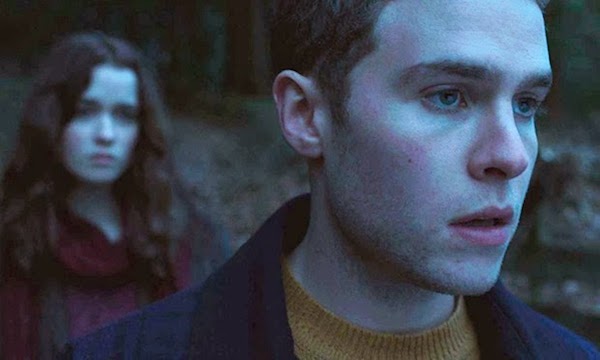 What we have here folks is a horror rarity.  A movie that actually lives up to the hype!  And given the knowledge of there not being a script and heavy improvisation going on, it will hopefully allow you to appreciate In Fear even more when you watch it.  As I said earlier, I’m on board with a second viewing and that’s a true testament to what director Jeremy Lovering has done here. And thanks to him and this movie, I definitely won’t be taking my wife on any spontaneous romantic getaways to a hotel in the woods anytime soon.