I was worried about spending another $300 for Front Of The Line passes at Universal’s Halloween Horror Nights in Hollywood again this year.  Would I be underwhelmed?  Would I accidentally beat the shit out of someone trying to scare me?  Luckily, I can answer no to both of those concerning questions that I had.

Let’s get right into the meat of this haunted house sandwich here and start from worst to first:

The Walking Dead:  End Of The Line

Nope, not a typo.  This was my least favorite this year by far.  The main reason being that it’s just a tired concept at this point, since it’s the third year in a row Universal’s had a Walking Dead maze.  Sure the prison set was impressive as you walk in and the nifty tree walker stuck in the ground got some points, but there are only so many things you can do with zombies in a haunted house. The long jaunt to the backlot where the maze is located was the best part, as you were welcomed into the community of Terminus with walkers running at you.  What’s lacking overall in my opinion are some actors to portray some of the characters from the hit TV show.  The presence of a Darryl Dixon look-a-like would have helped, but most likely wouldn’t have saved this snooze-fest.

What a shocker!  A Universal Pictures film release gets it’s own maze to shamelessly help promote it!  Perhaps I’m being a bit too harsh on this one, but I honestly don’t care about the upcoming Dracula Untold movie and wasn’t too excited about this promotional attraction either.  And as I walked up to the maze, my instinct seemed to be correct.  The outside entrance was a poor attempt at a cave I think, and it looked thrown together at the last minute. The inside didn’t fare much better unfortunately and had scary Dracula guys with swords lurching out at me.  I can admit that I did jump once and maybe shrieked a little in this lackluster maze, so for that alone I’ll mark it a small notch above The Walking Dead.

Face Off:  In The Flesh

I know this one might be on the bottom list of most, but it earned a higher ranking for me because my wife and I love the SyFy show that it’s based on. Another reason that it’s higher up is because this maze takes place in Universal’s House Of Horrors which sadly will be no more after Halloween Horror Night’s ends it’s run this year.  Annoying dubstep music aside, I got a kick out of seeing some of the best make-up creations from the show (the ice cream cone killer and scarecrow being my favorite) and it was a decent send off for the House Of Horrors.  RIP…..

From Dusk Till Dawn

As you walk up to the From Dusk Till Dawn maze, you can’t help but smile as you see the neon awesomeness of the ‘Titty Twister’ sign taken from the 1996 movie (and from the TV show that I haven’t seen on Robert Rodriguez’s El Rey network).  Keep in mind they had to make it PG-13 though and call it ‘The Twister’ for the kiddies hanging around.  This maze had about everything you would expect in a From Dusk Till Dawn maze.  Salma Hayek “look-a-like” dancing when you walk in?  Check.  Numerous vampires popping out around corners and through walls to give you a good scare?  Double check.  At times it felt a bit generic, but there were enough good set pieces (which is what Halloween Horror Nights is known for) to make it one of my pleasant surprises of the night.

I’ve never been a huge fan of 3D in general, especially past 3D mazes at Halloween Horror Nights.  The novelty is fine, but it’s more of an annoyance if anything and can really take away from the artistic work involved for a lot of the characters and set pieces (this was very evident a few years back with the House Of 1000 Corpses maze).  But I guess if anything should be colorful, fun and in 3D, it should be some creepy clowns!  I dug this maze because I both love and hate clowns at the same time.  And walking past creations of people vomiting up neon puke and cereal is always a plus (with the stench to go along with it).  It was a fun maze, which in the end is all that matters on a 90 degree night in Southern California.

And now for my most pleasant surprise of the night!  Being that I could barely make it through any of the Alien Vs. Predator movies, I had a lot of hesitation about this one.  I love the Alien and Predator franchises on their own, but the hybrid movies of the two were not good.  This maze on the other hand…..was pretty amazing.  The animatronics were top notch, as were the overall set pieces involved.  It was surprisingly scary as well and honestly had the biggest ‘Holy Shit’ ending room that I’ve ever experienced in my 7 year Halloween Horror Nights experience.  I won’t ruin it in case you do end up going, but it’s pretty impressive.

An American Werewolf In London

Although not a pleasant surprise because I already figured I would be pleased with this one, An American Werewolf In London more than exceeded my expectations.  As a huge fan of the 1981 John Landis written and directed movie, I had heard nothing but good things about this maze when it debuted last year in Orlando.  From the moment you walk into The Slaughtered Lamb bar, you’re immersed into the world that Landis created for the movie.  Nothing is forgotten here as far as detail is concerned.  The crazy dream Nazis complete with fake machine guns (and even the throat slit is included), the stunning recreation of David’s werewolf transformation, the movie theater full of David’s victims, and of course numerous full-on animatronic werewolves jumping out when you least expect it.  Just top notch all around and easily the best of the night.

All in all, this year’s Halloween Horror Nights was better than I expected and even though it’s pricey for the Front Of The Line passes, it’s well worth it considering a lot of people waited over 2 hours for The Walking Dead maze. My deepest condolences.  Didn’t get to hit the Terror Tram this year because I’m old and it was past my bedtime, but I put in my 5 hours of walking and escalating so I felt accomplished.  Speaking of, the following day I felt very accomplished as I sat down to eat my gigantic Lard Lad donut straight out of the world of The Simpsons (and for only $5!).  By the way, that donut gets a rating as well. 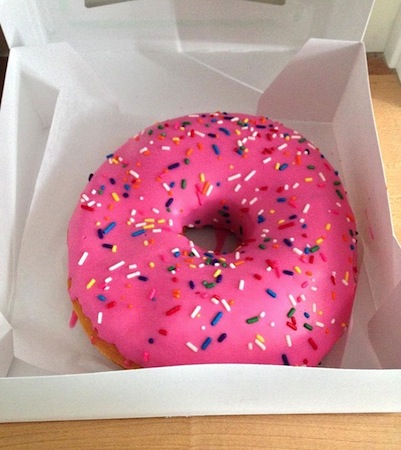