Well that’s just great.  I was about to book my vacation to the lovely town of Texarkana, Texas and now I have to put everything on hold after watching the new remake/reboot/sequel flick, The Town That Dreaded Sundown.  The bad news is that it’s back to square one for my vacation planning.  The good news is that the movie wasn’t half bad!

It’s been a while since I’ve seen the 1976 version of The Town That Dreaded Sundown.  I remember it being loosely based on actual events (a serial killer named the Phantom Killer who murdered people in 1946), but I mostly remember it for a WTF death scene involving a trombone.  Now almost 40 years later, a new version which can be best described as a reboot and homage of sorts, has been released thanks largely in part to a couple of guys from the American Horror Story crew (producer Ryan Murphy and Alfonso Gomez-Rejon). 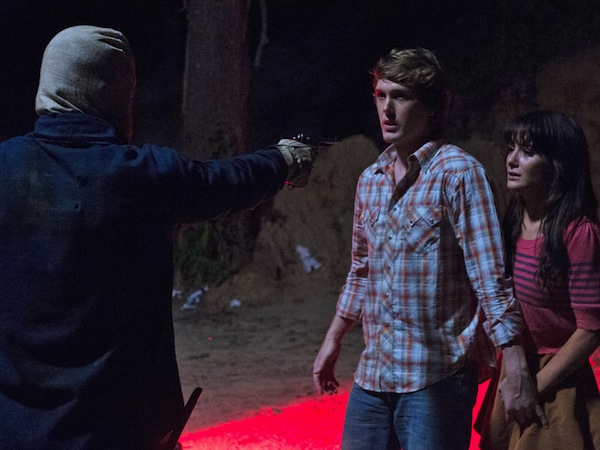 I love a good slasher movie, and unfortunately there seems to be a pretty large void in the horror world as of late regarding that sub genre.  So needless to say, I was pretty into the trailer for The Town That Dreaded Sundown when it was first released and I saw it.  It looked great visually, looked brutal as far as the violence department goes, and I’m always a sucker for a killer who wears a sack on his head.

Let’s talk some plot for a minute:  Taking place in Texarkana, this quiet little town gets together every Halloween to watch the original version of The Town That Dreaded Sundown at the drive-in theater as a sort of tradition.  This of course being because the movie was based on the actual murders that took place in the town in 1946.  Kind of a morbid tradition, but whatever.  Corey (Spencer Treat Clark) and Jami (Addison Timlin) sneak away to have a make out session and unfortunately come face to face with with a sack-headed killer who could or could not be the very same killer from 1946!  Only he would be about 100 years old though in that case.

Corey is killed (spoiler alert) and Jami is left alive and told from our killer to spread the word around town to “Make them remember.”  Remember what exactly?  Maybe to turn their iron off before leaving the house?  Or maybe to say thank you after someone does something nice for you?  Whatever the case, copycat murders from the 1976 movie start happening throughout town and everyone could be a suspect!  Is it the cop who looks an awfully lot like Lumbergh from the movie Office Space?  Or maybe the weird, quirky, awkward kid who has always had a crush on Jami?  I won’t spill the beans, but just know that it could be anyone.  Even a near 100-year-old murderer with severe arthritis.

The acting throughout The Town That Dreaded Sundown is pretty decent for an ‘under the radar’ horror movie.  You’ll notice a lot of familiar faces such as: Gary Cole (Office Space), Anthony Anderson (The Departed), Veronica Cartwright (Alien) and the late Ed Lauter (Cujo).  Addison Timlin plays a pretty good Scream Queen to round out the bunch as well.

On top of the decent acting, the movie looks great from a stylistic point of view. I watch American Horror Story and definitely picked up on Alfonso Gomez-Rejon injecting that vibe into the film here.  For the gorehounds, the red stuff flows and looks to be mostly of the practical type which is always a plus. There’s even an upgraded take on the infamous trombone scene! 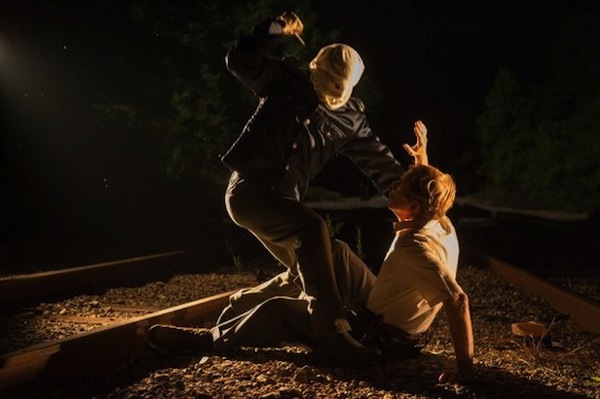 Ok – now on to the bad stuff.  I think The Town That Dreaded Sundown got a little too cute for it’s own good.  I’m a bit bored with the whole ‘movie within the movie’ concept and there was too much going on here for the majority of the runtime.  In my opinion, it would have benefited from just being a lean, mean slasher machine instead of trying to tie in events and characters from the original murders and the 1976 movie.  I would have gotten more pleasure out of a creepy sack-head killer tearing up shit in the town without any real motive.  Pure evil always wins me over.  And man oh man – they did not have to do the whole Scooby Doo ending with “Now let’s see who you really are!!“. The ending was one of it’s biggest downfalls.

As a whole, I had a pretty decent time with The Town That Dreaded Sundown, but I couldn’t help but be a little frustrated at what could have been. I miss slasher movies.  Old school slasher movies to be exact, where there’s a small motive, but in the end it’s all about the killer and the kills.  I’ll take what I can get for now though, and appreciate the positives put forth here.  And maybe, just maybe, I’ll rethink that trip I was planning to the wonderful town of Texarkana.