What started as a fake internet trailer in 2010 at the expense of Eli Roth, has now turned into a full length killer clown movie thanks to director Jon Watts and his screenwriting partner Christopher Ford.  Obviously when you think of killer clown movies, Tim Curry’s portrayal of Pennywise in the television mini-series It and the horror/comedy Killer Klowns From Outer Space come to mind. But other than that, the horror movie dealing with the taboo topic of clowns has been far and between.  Which makes Clown such a welcome surprise, and for the most part it definitely delivers the goofy gory goods.

The story is fairly simple and seems suited for an old episode of Tales From The Crypt.  Kent (Andy Powers) is a real estate agent trying to make it home for his son Jack’s birthday party where everyone is expecting a clown to show up.  But when the clown cancels, Kent has to improvise and luckily finds a clown outfit (slightly too luckily by the way) in a dusty trunk at the house he’s working on. He puts it on, shows up at the party and saves the day!  His wife Meg (Laura Allen) is thrilled and so is Jack.  Kent falls asleep with the clown outfit on, and realizes that when he wakes up, he can’t get it off. 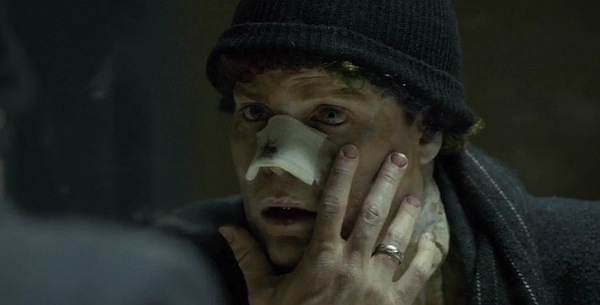 At first, Kent tries to think of logical reasons why he can’t remove the costume. Even taking the clown nose off proves tough, as it literally almost tears his nose off.  It isn’t until he tracks down the original owner of the outfit named Karlsson (Peter Stormare) that he realizes what he’s up against.  The costume is cursed and whoever puts it on, is cursed too and becomes a clown. And the only way to get it off is by decapitation or by eating/killing five children. Seems like a lose/lose situation to me.  Let’s just say that Kent attempts the decapitation, but it doesn’t go smoothly.  So it’s on to ‘Plan B’ and some kid killing!

Allow me to be Captain Obvious for a minute and say that Clown is definitely not a kid’s movie.  It’s not even a movie fit for most adults given it’s subject matter and the fact that kids are murdered.  That might be part of the reason that as of the writing of this review, it’s only available on Blu-ray in the UK. Even though I did cringe when the kids were being killed (mostly offscreen btw), I do have to say that I rather enjoyed Clown for the crazy ride that it was. I loved the performance of Andy Powers as Kent, the loving father and husband that is thrown into this terrible situation where his stomach growls when it’s time to eat some children.  I enjoyed the hell out of watching the slow transformation as he becomes more and more evil, and kudos for the added touch of the ‘clown colored brains’ during his first suicide attempt. 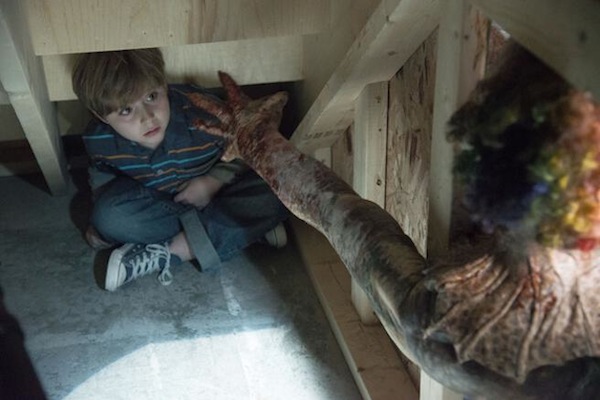 On the downside, at 99 minutes Clown felt about 20 minutes too long.  I’ve read other reviews saying that it would have worked better as a short, but I don’t necessarily agree with that.  It definitely needed time so that you can watch Kent’s decent into madness and witness his transformation, but it easily could have been trimmed to make the whole experience tighter.  I would have also liked to see more screen time for Kent as the clown and less for his wife. It dragged the movie down when she was onscreen (no offense to her acting) and I felt like I was missing out on some quality clown time because of it.

Should I have been more sensitive while I was watching Clown?  Should I have not grinned while watching kids meet their demise at the hands of a murderous clown?  Most likely yes to both of those questions.  But I loved the balls that Clown sported, and I commend any horror movie that can go where it went.  A perfect movie?  Far from it.  But enjoyable nonetheless and a worthy killer clown movie to sit along the shelf next to Pennywise.  So don’t be a Bozo, and go seek it out to see for yourself.  I had to get one good clown pun in there before the review was over.