2015 has surprisingly been a pretty solid year for horror movies so far, especially the crop of independent entries like It Follows and We Are Still Here.  One of my most anticipated indie horror offerings has been Creep, the latest addition to the found-footage craze.  I’m a bit nauseated with that whole subgenre, but I was hoping Creep would act as my Pepto-Bismul and make me feel better.  And you know what?  It did!

Creep is about as simple and effective as a horror movie can be.  Starring and written by Mark Duplass and Patrick Brice (who also directs), it’s a pretty fascinating look into the human psyche and what happens if we trust someone too much.  It also touches on the stupidity of that trust.

Aaron (Patrick Brice) is a freelance videographer who responds to an ad to make $1000 for a day of filming at a remote cabin for a stranger.  That stranger turns out to be Josef (Mark Duplass), who immediately begins messing with Aaron by scaring him while he sits in his car waiting to go up to the door.  It’s after this that Josef tells Aaron that he’s there to film him because he has terminal cancer and wants to make a video for his unborn son to have as a memory after he’s dead.  Simple enough, right?  That is until Josef wants Aaron to film him in the bathtub for “tubby time”, and it’s at that point that we the audience realize that Josef is definitely a bit…….off. 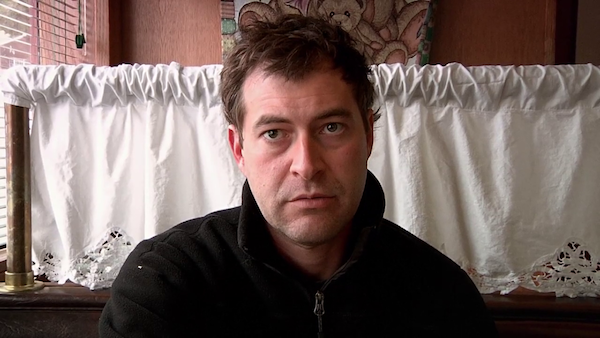 The duo continue filming throughout the day and go on a little hiking trip (with more Josef hijinx), stop and get pancakes afterwards (where Aaron reveals an embarrassing story), and then head back to the cabin for a drink that Josef insists on.  We’re introduced to Peachfuzz, a wolf mask that Josef likes to put on to sing a song and dance, and also scare the shit out of people with. He clearly isn’t playing with a full deck and Aaron realizes that possibly a little too late.  Aaron “loses” his keys, tries to drug Josef to escape, and eventually meets up with Peachfuzz before that can happen.  I don’t want to spoil the rest, but it’s a classic cat-and-mouse game with a little Fatal Attraction thrown in for good measure.

Creep can only succeed if it’s two actors are convincing and can carry even a short runtime of under 80 minutes.  And luckily, they do.  Mark Duplass is as entertaining as he is downright creepy (hence the movie title) and without his performance, there isn’t much here that we haven’t seen already.  Patrick Brice does a good job playing the naive and sometimes point blank stupid protagonist who just seems to be a little too trusting, even for a horror movie character.  If I had hair, I would have literally been pulling it out at some of his choices, but then again – isn’t that the point of horror movie most of the time?

As I said at the beginning of this review, I’m pretty much over the found-footage style of filmmaking.  Creep did give a glimmer of hope and add a breath of fresh air though, so I’ll leave my mind moderately open for now. However, with news of two sequels coming, I’m really scared that we’ll be entering VHS (the found-footage anthology franchise) mediocrity when it’s all said and done.  For now though, Creep is A-ok in my book and builds on the already impressive horror roster of 2015.  It kept me interested and on my toes and delivered one of the better endings to a horror movie I’ve seen in a while. Not to mention that I was actually rooting for Josef in the end.  Yeah, I’m a sick bastard.